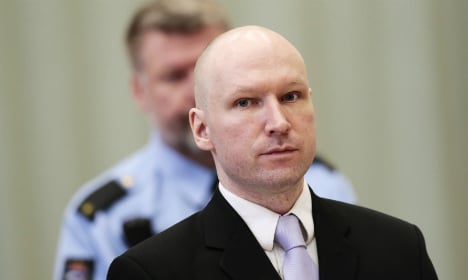 In an April 20 verdict that stunned observers, the Oslo district court found Norway guilty of violating the European Convention on Human Rights by keeping the rightwing extremist in isolation.

Breivik, who is serving a 21-year sentence for killing 77 people in a gun and bomb rampage in July 2011, has now been held apart from other inmates for more than five years.

He enjoys comfortable conditions at the Skien Prison, with three cells at his disposal equipped with two showers, as well as two televisions, an Xbox, a Playstation, books and newspapers.

But he testified that his isolation regime was having negative effects on his health, citing headaches and concentration difficulties.

The state has appealed against the ruling.

The appeal case was initially scheduled to begin on November 29 but Breivik's lawyer, Oystein Storrvik, was unavailable at that date because of a prior case commitment.

The exact dates and the location of the hearing have yet to be decided.

“We are considering the Skien Prison,” she said, referring to the penitentiary where Breivik is being held and where the lower court hearing was held for security reasons.

Breivik, now a self-proclaimed Nazi, killed eight people in a bombing outside a government building in Oslo and then gunned down another 69, most of them teenagers, during a rampage at a Labour Youth camp on Utoya island on July 22, 2011.

During the lower court hearing, Breivik aired a long list of complaints about his prison conditions, ranging from cold coffee and food to his restricted contact with the outside world.

Breivik had challenged restrictions on his mail and prison visits.

Norway was found guilty of violating Article 3 of the European Conventionon “inhuman” and “degrading” treatment.

But the court ruled that prison authorities had not violated his right to correspondence, guaranteed by Article 8 of the convention.