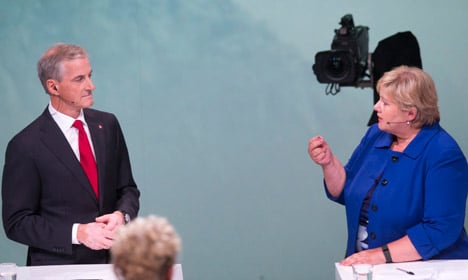 Solberg objected to Støre's attempts to bring both Donald Trump and Sweden into the debate. Photo: Terje Bendiksby / NTB scanpix
Solberg objected to Støre bringing the Republican nominee into the conversation, telling him “it’s me you face in next year's election” and joking that the Labour leader would perhaps rather square off against Trump or former UK Prime Minister Margaret Thatcher.
Støre had suggested that Solberg’s government could move Norway in the same direction that Trump wants to take the United States.
“We’re not there today, Norway doesn’t have those conditions. But could we get there? Yes. We have a government that has tax cuts as their priority and that wants privatization of the public sector,” Støre said as the two squared off at the annual political forum Arendal.
Solberg responded by saying her government has policies that are completely different from what Trump proposes.
“We have a policy to take care of our growth potential. We have a policy to take care of the weakest [in society, ed.]. I think it would be nice if we were discussing Norwegian policies and not bringing in Donald Trump,” the PM said.
PM won't pick sides
Solberg said that out of respect for another country’s democratic system, she would not warn Americans against electing Trump president, even though many of his statements have worried her her.
“Many of the things Trump has said have been very worrisome, including on Nato and nuclear weapons. I do not think these are the solutions for America’s challenges. But a Norwegian prime minister should not warn against or support candidates in other countries,” said Solberg.
The PM added that it is often difficult to determine whether Trump actually believes everything he says or whether some of his statements are just the result of a cynical campaign.
Støre on the other hand made no bones about what he thinks with Trump, whose potential presidency he has already called “deeply disturbing”.
“What we hear from Trump is dangerous. It is dangerous if we get an America that says Nato solidarity does not apply, that international law, climate agreements and trade agreements do not apply. And the United States has an open democracy, so we can say what we think about this. And I think he's dangerous,” the Labour leader said.
FM recently condemned Trump
Earlier this week, Solberg’s foreign minister, Børge Brende, slammed Trump for his foreign policies and for making “statements about women and minorities that we do not need and that do not belong in the 21st century.”
The head of parliament’s foreign affairs committee, Anniken Huitfeldt of the Labour Party, also went on record to support Trump’s opponent, Hillary Clinton.
“It is incredibly important that the Americans do not adopt a confrontational position toward the rest of the world. It is important for Norway that Hillary Clinton be elected,” Huitfeldt told NRK.
'Norway is not Sweden'
During their debate on Thursday evening, Solberg also objected to Støre’s attempt to draw parallels with neighbouring Sweden. He said that under eight years of rule by Sweden’s centre-right Moderates, a sister party to Solberg’s Conservatives, Swedish society saw in an increase in inequality, something he warned could happen in Norway.
“It must not happen, because when the differences have first arisen, they are very difficult to reverse,” he said.
“But it's not Sweden we should be discussing, it is Norway,” Solberg snapped back.