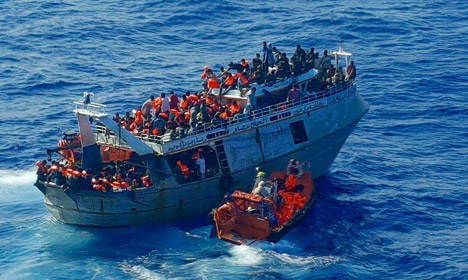 The fishing boat had 296 passengers, including 73 minors. Photo: Kripos/NTB Scanpix
Of the nearly 300 migrants, 73 were minors. Kripos said that most of the passengers on the boat were from Sudan and Egypt and that many of them were suffering from dehydration.
Since last summer, Siem Pilot has patrolled the waters patrolling the waters between Libya and Italy and assisted the Italian authorities with border controls.
In May the ship came to the aid of more than 1,000 people in what was its largest ever rescue mission.
The Norwegian rescue boat Henry von Koss has also been involved in rescue operations and patrols the area between Turkey and the Greek island of Lesbos.
Additionally, the Norwegian Red Cross helps fund the organization's rescue ship Responder, which on his first patrol on Wednesday rescued 327 people. That ship is based in Malta.
Nearly 250,000 refugees and migrants have crossed the Mediterranean on their way to Europe this year, and over 4,000 have died in the attempt, according to the International Organization for Migration (IOM).