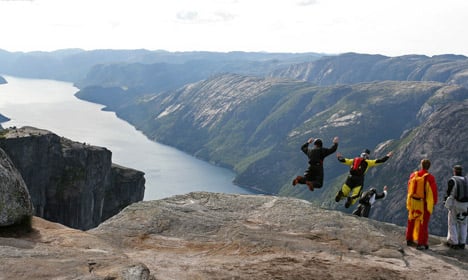 Base jumpers at another popular spot in Norway. Photo: Dnikitin/WikiCommons
Police said on Friday that it is unlikely that the jumper, whose nationality was not publicly identified, would have survived his accident.
“The man is presumed dead but that is not confirmed since personnel has not reached him yet,” Alf Stormo from the Møre and Romsdal police told NTB.
Police said previously on Friday that rescue crews were unable to reach the man.
“It is difficult to put [rescue] people in there. There are vertical steep walls, and the mission is dangerous,” Western Police operations leader Torry Aakenes told NTB, calling it “a difficult situation”.
Police in Møre and Romsdal were notified of the situation at 7.30pm on Thursday. Within two hours of the call, they had located the jumper at a height of some 1,300 metre.
On Friday, rescue groups plan to draw up a plan for how to possibly extract the jumper.
Police know the identity of the man, but did not want to release the information until next of kin have been notified.
There were two tourists who base jumped from Hårstadnebba in Sunndal on Thursday. The one who successfully landed reported the accident to the police.
Hårstadnebba is a popular base jumping location:

In related news, rescue workers on Friday morning were able to successfully reach five hikers who were stuck on a steep trail in Sogn og Fjordane in Western Norway. Two of the hikers, all of whom are foreign tourists, suffered minor injuries. 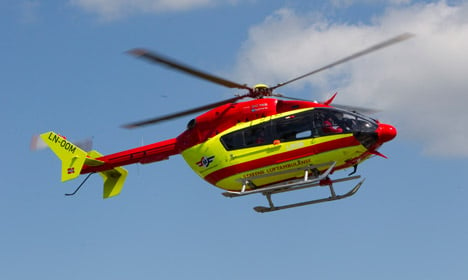 BASE JUMPING
Base jumper’s body removed from Norway mountain 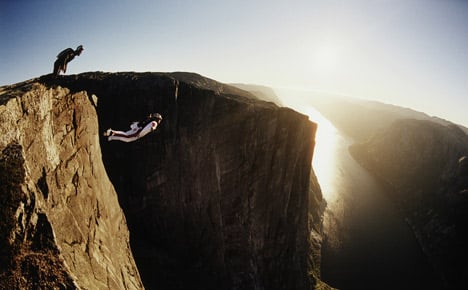 DRONE
This might be the best drone footage out of Norway ever
Url copied to clipboard!