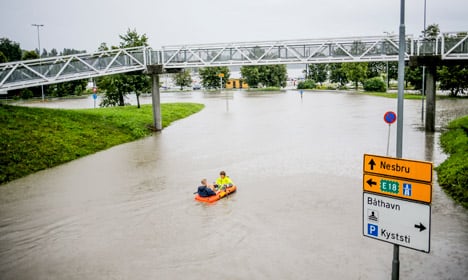 Eastern Norway saw extreme rainfall over the weekend. Photo: Krister Sørbø / NTB scanpix
Although many in Norway are still on holiday and the annual summer music festival Øyafestivalen is about to kick off in Oslo, much of the nation should prepare for a cold spell.
“It will be very cool, and Wednesday and Thursday will have temperatures that are low for the season across the country, except for Troms and Finnmark. We will get hints of autumn and winter,” Geir Ottar Fagerlid of the Meteorological Institute said.
Despite the fact that temperatures could be as low as 8C when Øyafestivalen begins on Wednesday, the festival’s PR manager, Jonas Prangerød, said he isn’t worried.
“The park looks good and we had rain at the festival the past two years, so I think it will be fine. People just need to dress for the conditions, but we have an audience that is used to that,” Prangerød said.
While music fans in the capital will be cold, things will be even worse for those who are spending their final summer vacation days in the mountains.
“There could be snowfall in the highest mountain passes, also in southern Norway, and tourists staying overnight in the mountain could suddenly wake up to snow,” Fagerlid said.
The meteorologist said that even though the conditions aren’t unusual for this time of year, it’s always good to warn people about what could be in store.
The Norwegian summer has been marked by cloud activity across the country. Bergen has reached a new precipitation record, and parts of Oslo measured 55 millimetres of rain within two hours over the past weekend, something that only occurs every 25 to 50 years.
The Norwegian Civil Defence (Sivilforsvaret) had to residents respond to rainfall in eastern parts of the country over the weekend, and Western Norway faces flood warnings for Monday and Tuesday.