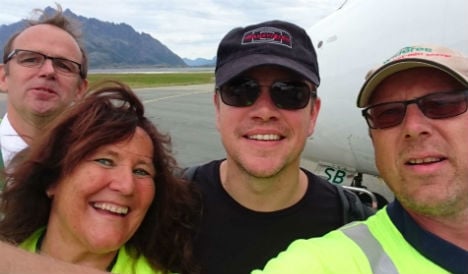 Matt Damon takes a selfie with airport worker Heidi Sletten Reiertsen on arrival in Lofoten. Photo:
The complaint comes as US star Matt Damon is in the Lofoten Islands to shoot part of his upcoming science fiction comedy Downsizing, which is slated to come out in 2017.
“It may be too much of a good thing if even more tourists come here thanks to the film,” Gunnar Skjeseth, chief executive of the Lofoten Explorer luxury cruise ship, which is working with the production, told Norwegian broadcaster NRK.
“We in the tour business have more than enough to do already, all year round. It is debatable whether we need more tourists.”
Fredrik Sørdal, the mayor of the nearby town of Flakstad said the growth in tourism was “challenging”, warning that infrastructure was already at breaking point, with acute problems with waste disposal, public toilets and parking, and severe erosion on paths leading to popular coastal locations.
“In Flakstad we have for example become extremely unbalanced when it comes to tourism this year, and need to take many measures before next year,” he said.
Norway has seen a sharp rise in the number of tourists since Disney’s film Frozen, which was developed with the support of Norway’s tourism agency, came out in 2013.
Over a million tourists are expected to visit the country between April and September this year, with some popular destinations seeing visitor numbers rising 20 percent.
“This will means more traffic,” Sørdal warned. “Part of the road network consists of narrow and complex sections. I fear that that dramatic accident, the accident we do not want to have here, is getting nearer day by day.”