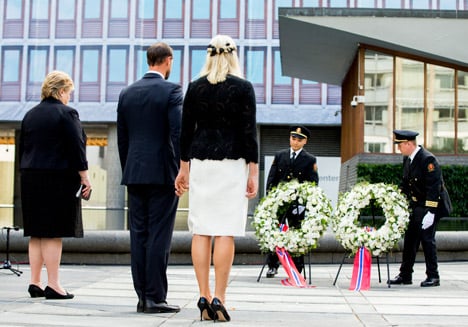 PM Erna Solberg, Crown Prince Haakon and Crown Princess Mette-Marit lay wreaths in Oslo on Friday as Norway marks five years since the terror attack that killed 77 people. Photo: Vegard Wivestad Grøtt
The PM said that traces of right-wing extremist Anders Behring Breivik’s attack are still visible and palpable five years later.
“It has been five years since 77 people were killed. It has been five years since that summer day became one of the darkest days in Norwegian history,” Solberg said from Oslo’s Government Quarter, where Breivik detonated a bomb that claimed his first eight victims.
“Those we lost will always be there. Time does not heal all wounds,” the PM continued.
“Five years goes by fast for a little girl or boy who is growing up [but] for those who have lost someone, five years is nothing. We still see traces of terrorist acts. The physical tracks. But these are not the biggest. The biggest tracks are those left in us as people. In the wanting for those we love,” Solberg said.
The prime minister listed several places in the world that have experienced terrorist attacks over the last year during her speech and spoke among other things about the attack in Nice, France last week.
“Today we also send our thoughts to those affected by these and other attacks. The terrorists' ideologies may be different, but they speak the same language. Weapons and violence are their principal tools,” she said.
“Terror can only be combated by offering a better world. We shall bring forth that which brings us together because terrorists want to split us apart and set groups against each other,” Solberg added.
After Breivik detonated a bomb in Oslo, we went the island of Utøya posing as a police officer and killed 69 people, mostly teenagers. The convicted terrorist hunted his victims down for an hour and 15 minutes, as they were trapped on an island just 0.12 square kilometres surrounded by chilly waters.
The extremist is serving a 21-year prison term, which can be extended indefinitely.