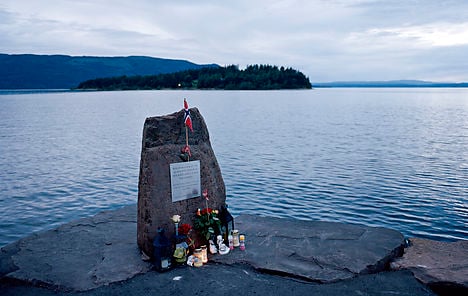 The inscription reads: "If one man can display so much hate, think of how much love we can all display together". Photo: Dennis Lehmann/Scanpix
As more and more countries ponder how to respond to such atrocities, Norway — which on Friday marks the fifth anniversary of Breivik's hate-filled massacre on Utøya island — has sought the path of “openness” and “love”.
“Our response is more democracy, more openness, and more humanity,” was how then prime minister Jens Stoltenberg said his compatriots should respond to the attack.
The nation was stunned after eight people were killed in a bombing outside a government building in Oslo and another 69 were gunned down, most of them teenagers, at a Labour Youth camp on the island of Utøya on July 22nd, 2011.
See also: New Utøya learning centre honours victims and survivors
Whereas the United States declared its “war on terror” after the 9/11 attacks, Norway, Stoltenberg said, would seek to “answer hatred with love.”
While elsewhere in Europe the talk has been of ratcheting up security and thereby sacrificing a degree of civil liberties in return, the Norwegians have made it a point to stand by their open society principles.
“The country is identical in many ways today [as prior to the Breivik attacks] — and that is a good thing,” says Eskil Pedersen, former leader of the Labour Party's youth wing, who managed to flee the Utøya carnage.
See also: Five years after Utøya: A tale of personal triumph
“Terrorism's objective is to turn society upside down. So it is a victory that we have not upended everything and we can today show a recognisable face” as a strong and united nation, Pedersen told AFP.
There were no US-style Patriot Acts or rushed anti-terrorist legislation or armed forces in the streets after the carnage. One of many memorials erected for the victims on Utøya. Photo: Jon Olav Nesvold / NTB scanpix
But a year after the massacre, an independent fact-finding commission highlighted numerous communications and logistical failures and shortfalls in coordinating a response. The conclusions led to a gradual — and generally consensual — overhaul of the security services and legislative weapons designed to help prevent a repeat.
As for the legal response, Breivik was handed a 21-year prison term  — which can be extended indefinitely  — following what was seen as a model trial.
But earlier this year, Norway found itself having to appeal an Oslo court's ruling that Breivik's solitary confinement in prison constitutes “inhuman” treatment — a verdict which stunned observers.
The court ruled that his isolation from other inmates violated Article 3 of the European Convention on Human Rights, which Norway contests.
See also: Norway to appeal Breivik human rights ruling
One of ours
Stoltenberg, now head of Nato, said within hours of the attack that “the response to violence is more democracy, more humanity but never naivety”.
Breivik was a home-grown killer and Norway has not experienced the kind of violence which has rocked France and Belgium in recent months.
Journalist Asne Seierstad, author of a book on the Breivik attacks, said: “Norway has never had to face Islamic radicalism. And we don't know what would have been said in that case.”
The case has seen Breivik's xenophobic world view dragged from the dark periphery of internet-based extremism squarely into the public arena.
This has been done partly on purpose in order to better fight these ideas.
Anthropologist Thomas Hylland Eriksen however said Breivik accelerated a polarisation of Norwegian society, which deepened after the migrant crisis.
“Those who, without necessarily being supporters of terrorism, share his opinions hostile to multiculturalism and Islamo-sceptic… are greater and greater in number, more visible, more mainstream,” says Eriksen.
“If July 22nd, 2011 was a test for democracy, I think one can say we have passed it,” said Pedersen.
“But this is not a definitive victory. We must continue uniting around democracy.”