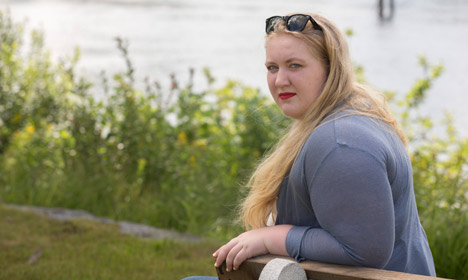 Marte Ødegården was severely injured in the Utøya attack but has fought back to reclaim her life. Photo: Terje Bendiksby / NTB scanpix
NTB’s interview with Marte Ødegården has to be done via Skype, as the 22-year-old is currently in the United States. She is alone on a three-week trip combining bus rides and flights between a series of cities in the South. The journey would be tiring for most people. For Marte, it is a personal triumph on several levels.
“The trip is a reward for myself because I have managed to complete a Bachelor's degree. It is also to prove to myself that I can undertake such a journey alone,” she says to NTB.
Just being able to ride the bus and plane is a victory. Since the attack five years ago, she has suffered from anxiety, especially when she is in large crowds and when she takes public transportation.
Anxiety issues
On July 22nd, 2011, 77 people were killed and a large number of people were maimed for life during domestic terrorist Anders Behring Breivik’s twin attacks on Utøya and Oslo’s government district.
Marte, who was 17 at the time, was one of the most severely wounded. Two shots through the back gave her massive injuries in the abdomen and back, extensive internal bleeding, a ruptured kidney and a paralyzed leg. When she was finally rescued from the island, doctors feared she would not even survive the four-minute helicopter ride to Oslo University Hospital, Ullevål.
“I think things are going pretty well now. I have a fairly normal life,” Marte says about her injuries today.
Hundreds of hours were used to rehabilitate muscles that need to compensate for those that were destroyed in her back and leg. She needs to take pain-killing medications every day. She has learned to live with the nerve pain in the leg, which causes a constant itch.
Most of all, Marte is happy that the paralyzing fear and the extensive sleep problems have now begun to subside. She can count on one hand how many nights of good sleep she got in the first years following the incident. Now it has begun to get better.
“It’s really only been over the past six months that I have felt like I can start to breathe and relax again,” she says.
Panic attacks
Marte describes the first year after the attack as a pure state of emergency. Instead of her third year in upper secondary school, she spent five months in hospital, a series of operations, lengthy rehabilitation, homeschooling and Breivik’s trial.
The years following have been filled with relentless toil to get back to a normal life, she says.
She finished her upper secondary education two years after the attack, and then moved from her family and support system in Kongsberg to her own apartment and university studies in Oslo. In the beginning it was a struggle just to go to the store. Marte was diagnosed with PTSD after Utøya, and panic attacks regularly struck her in class and on the tram to and from the University of Oslo, which completely drained her of energy. Nevertheless, she has managed to get her Bachelor's degree in European Studies.
“It is only in retrospect that I realize how tough it actually has been. I have likely often bitten off a little more than I can chew, but I also think it is one of the main reasons I've managed to get over the fear and into a normal life,” she says.
Never naive again
She is rarely bitter over the attack that so drastically changed her life, Marte says.
“At the hospital the first year I had to undergo many rounds of reflection. I thought: ‘What would it take to get the life I want?’ I think these thought processes were very influential for how I've coped with the years gone by,” she says.
The 22-year-old looks positively toward the future. She has made it in to the Future Leaders programme, which picks out young managerial talent. She is actively involved in local politics in Kongsberg, and her energy levels and work capacity have gradually increased.
But much will never be as it was before.
“What I miss most is the naivety I had before. Being able to live completely carefree. I'll probably never be able to do that again,” she says.