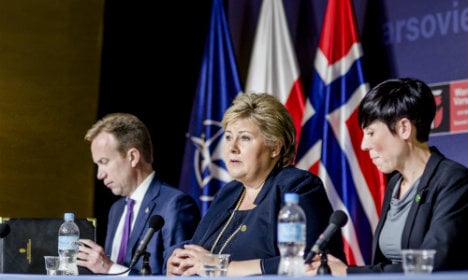 Prime Minister Erna Solberg and Minister of Foreign Affairs Børge Brende give a press conference at the Nato summit in Warsaw on 8th July 2016. Photo: Johan Falnes/NTB scanpix
Solberg has previously described Norway as a “committed Nato member”, with the country participating fully in defence agreements such as Nato's missile defence system.
“Stability in Europe's neighbouring areas is important for our security,” said Minister of Foreign Affairs Børge Brende.
A further 1 million kroner ($120,000) will be given to a Nato trust fund aiming to increase women's participation in the Jordanian armed forces, the ministry announced in a statement.
Norway will also lead a trust fund for the Joint Training and Evaluation Centre in Georgia. The purpose of the centre will be to modernise Georgia's defence sector and increase the Nato interoperability of its forces.
“The unstable situation to the south and east represents a long-term challenge to Europe's security. It is important that this challenge is met not only by strengthening our own defence and deterrence capability; we must also enable our partners to take responsibility for their own security,” said Brende.
Ongoing Nato work in the region already supported by Norway includes parliamentary control of the armed forces, retraining and personnel reform and imrpoving governance.
“Nato has long experience in helping countries in its neighbouring areas to develop their security and defence sectors. This has made an important contribution to stability in Europe after the Cold War. Now the Alliance can use this experience in other areas, such as North Africa and the Middle East,” Brende said.