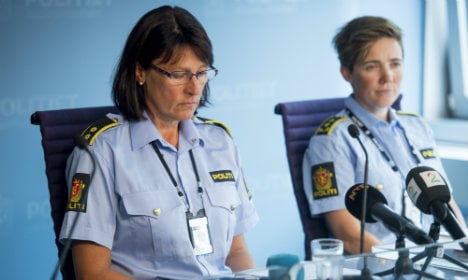 Kari-Janne Lid, head of Oslo Police Department's sex crimes unit (l) and police attorney Lene Hammersland at Monday's press conference. Photo: Jon Olav Nesvold/NTB scanpix
The man, who lives in Romerike to the north east of Oslo, was told to hand himself in at Oslo Police Station on Monday morning.
The crimes the man is charged with took place at Tiurleiken School in Oslo in June 2000.
“He responded uncomprehendingly to the charges when he was arrested,” police attorney Lene Hammersland told VG-Nyheter.
The evidence used to charge the man was gathered during the original investigation into the case in 2000. The assaults on the six and seven year-old girls were treated at the time as rapes.
But when the DNA tests did not show any matches on Police registers, the case was suspended due to lack of leads, the police confirmed to VG-Nyheter.
The man now charged with the crimes was convicted in Sweden on 17th March this year for breaking alcohol duty laws in 2014.
After Swedish police took DNA tests following this conviction, Oslo Police was informed of a match with the results from the investigation into the assaults in 2000.
“Investigations will now focus on uncovering whether further crimes have been committed. That is routine in this type of case,” Kari-Janne Lid, head of Oslo Police Department's sex crimes unit, told VG.
Lid told VG that procedure was in place for reopening old cases.
“It will be a normal investigation. We can go in with a clear overview, carry out a thorough review and make a new assessment based on the interviews and information we have from that time. We will also be conduct new interviews with the family,” said Lid.
The accused man was also accused of sexually assaulting a minor in 2006 before the case was dropped for lack of evidence and has previously received fines and suspended prison sentences on less serious charges, reports VG.
A full interview with the charged person was set to be carried out Monday afternoon along with a full search of the man's home and other relevant addresses.
The victims and their families were advised of the new arrest prior to Oslo Police Department's press conference on Monday, reports VG.