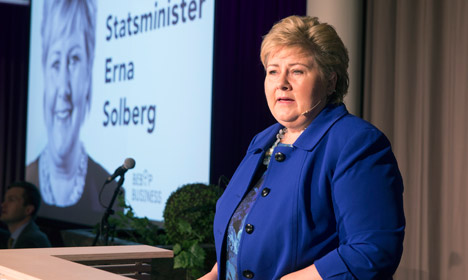 Solberg said Britain "would change the balance of power" if it joined the EFTA. Photo: Terje Bendiksby / NTB scanpix
Speaking with news agency Reuters on Wednesday, Solberg said that any bilateral agreements between Norway and Britain would be contingent upon how leaders in London and Brussels formalize Britain’s exit from the European Union.
“The deal they [the British, ed.] get will go a long way to clarify what kind of relationship they will have with EEA countries,” she said.
Norway itself is not a member of the EU but is part of the European Economic Area along with Iceland and Liechtenstein.
Iceland’s long-time president, Ólafur Ragnar Grímsson, recently said that Brexit could prove to be a good thing for countries in the North Atlantic.
“When Britain leaves the EU, we will see a triangle that covers a large part of the globe: Greenland, Iceland, the Faroe Islands, Norway – and now the United Kingdom. One just needs to look at a globe to see it,” Grímsson recently told Norwegian newspaper Klassekampen.
He added that  Brexit could make the European Free Trade Association (EFTA) much more relevant, but Solberg warned that Britain “would change the balance of power” if it were to join the association, which is made up of Norway, Switzerland, Iceland and Liechtenstein.
See also: Norway won't commit to UK joining EFTA
“Britain has other vital interests than Norway when it comes to negotiating free trade deals with other countries. And this is what we use EFTA for,” the Norwegian PM told Reuters.
“We have strategic interests on fish, while Britain’s and Switzerland’s strategic interests are more about finance and other sectors,” Solberg added.