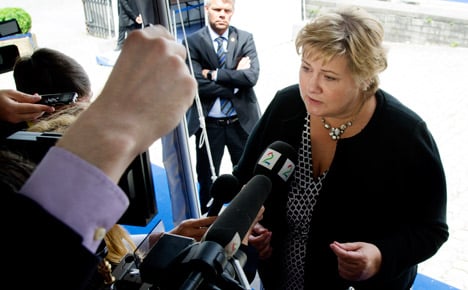 PM Erna Solberg was in Brussels on Tuesday to meet with other Conservative leaders. Photo: Johan Falnes / NTB scanpix
“The most important thing we can do is to safeguard national, Norwegian interests,” Solberg told NTB.
“An EFTA agreement will give us a good relationship with the UK. We can also get [a good relationship with the UK] through other agreements as well. And do we want Britain to be involved in dictating what the EFTA negotiates with third countries? Will our key national interests being benefited by that? That is the discussion we need to have,” Solberg said, pointing out that the dynamics of the EFTA negotiations with other countries will change.
“Parliament has been concerned that ILO [International Labour Organization] Conventions, labour rights and human rights should be in our agreements, and those concerns are not usually at the top of the list of the things the UK negotiates over,” she said.
For the UK to rejoin the EFTA, the EU countries and the four EFTA nations of Norway, Iceland, Liechtenstein and Switzerland would have to agree.
The Norwegian prime minister said she has no recommendations for what the UK should do after voters last week decided to leave the EU.
“It is up to the British to decide,” she told the British press in Brussels on Tuesday. Solberg is in the Belgian capital to meet with other Conservatives ahead of the EU top meeting.
“The most important thing now is to find solutions that are good for both the United Kingdom and the EU,” she said.
She emphasized that whatever the UK and EU decide, she thinks the European Economic Area (EEA) is a good solution for Norway, and that changes to the agreement are not up for consideration.
“We have a good deal for a good connection with the EU [and] it is important that we retain it,” she said, adding that Norway is “a small country that relies on market access”.