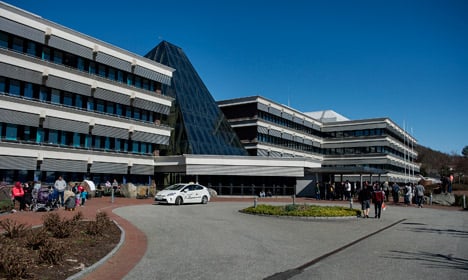 The Forus asylum centre in Stavanger. Photo: Carina Johansen / NTB scanpix
In the early hours of Tuesday, Stavanger Police sent three patrol cars to deal with a mass brawl at the Forus Akuttinnkvartering asylum centre. One man was arrested.
“The background [to the fight] apparently was [someone] disturbing the nighttime peace,” police spokesman Tor Helge Hallstavik told Stavanger Aftenblad.
The centre’s guards could not handle the fray, which involved up to 20 people, and therefore called the police. When officers arrived, the mood in the centre was tense but the physical fighting had stopped.
“The man who was most active in the fight was arrested. He will be charged with causing a public nuisance and immigration officials will determine if he is a possible candidate for deportation. We will not have trouble there,” Hallstavik said.
Police reported the incident at 1.44am.
Lars Petter Einarsson, an employee of the company that runs the centre, told NRK that the arrested man had had his asylum application rejected earlier on Monday. Einarsson said that there were only five people actively participating in the fight.
In January, ten people were arrested after a mass brawl at the same centre. After that incident, a number of asylum seekers were moved to other centres across the country.
The same asylum centre was also the site of a possible sexual assault on a three-year-old boy.