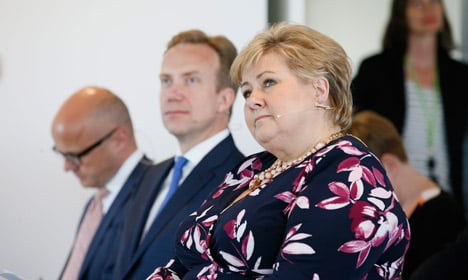 Both PM Erna Solberg and FM Børge Brende said they fear the ramifications of Brexit. Photo: Cornelius Poppe / NTB scanpix
“A weakened EU, a more split Europe [and] a more nationalistic Europe will mean that the economic situation will become more difficult in Europe,” Solberg told NRK.
Solberg said that if the UK chooses to withdraw from the union, it will leave not only Europe weaker but the entire world.
“In a world in which we have become more and more dependent on resolving things together, to downsize our joint institutions is actually dangerous,” Solberg said.
Solberg said on Tuesday that the Norwegian government has a plan in place to deal with Brexit should British voters choose to leave the union.
“We have an emergency plan. We have thought about how this is going to turn out. It is the indirect effects that are most important. In the short term, we know that the international banks and others have taken their precautions if there are major currency fluctuations,” Solberg told TV 2.
Norges Bank and the Financial Supervisory Authority has also established systems to mitigate the adverse effects of international currency unrest.
The Prime Minister is, however, most afraid of the political consequences.
“I fear the emergence of more nationalism and the rise in support for more extreme organizations. It will mean that we will become more paralyzed in those areas in which we need common solutions in Europe. And if Europe becomes more paralyzed, as the world becomes more paralyzed,” she said.
Foreign Minister Børge Brende also fears a no result.
“It's going to cause unrest during the first days if it is a no, and of course we have also thought through such a situation,” Brende said.
EEA and EU minister Elisabeth Aspaker is also concerned about Norway’s third largest trading partner leaving the EU.
“It will be a very demanding situation because it will means that we urgently need to position ourselves to negotiate a new free trade agreement with the United Kingdom,” she told TV 2.