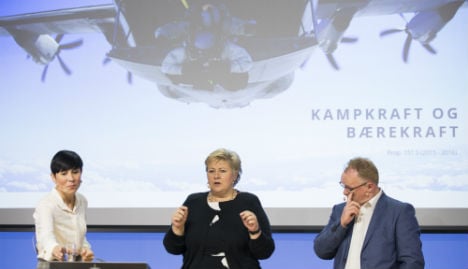 Norwegian Prime Minister Erna Solberg announced the decision to boost Norway's defence budget. Photo: NTB Scanpix
The Scandinavian country, a NATO member, plans new fighter jets and submarines to boost its ability to protect itself from its vast neighbour, with which it shares an Arctic border.
Over 20 years Norway would boost its defence budget by 165 billion kroner (17.5 billion euros at current exchange rate), according to details of a military programming law presented by the government.
“Unfortunately the geopolitical circumstances have changed significantly, in a bad way, in recent years,” Prime Minister Erna Solberg told a press conference in Oslo.
“We have an increasingly unpredictable neighbour to the east which is strengthening its military capacity, and showing willingness to use military force as a political tool,” she added.
The military programming law aims to upgrade the army both by efforts on maintaining existing resources and buying new equipment.
It foresees the purchase of 52 F-35 fighter jets and four submarines, as well as new naval surveillance planes to replace six ageing P-3 Orion aircraft.
The extra expenditure will bring Norway's military budget up towards the 2.0 percent of GDP goal fixed by NATO, while not reaching it.
Solberg said the country's current military might “is not adapted to the geopolitical situation,” describing a “historic defence effort, the biggest since the end of the Cold War.”
But it is less than the 180 billion kroner sought last year by the armed forces chief Haakon Bruun-Hanssen.
Before the military plans can be implemented the rightwing government has to get its proposals adopted in parliament where it is in a minority, and
could therefore have to make amendments.
Finland, meanwhile, said Friday in a security outlook that it “cannot exclude” the use of military force against its territory by neighbouring Russia.
The country, which shares the European Union's longest border with Russia, has gradually stepped up its cooperation with NATO after Russia seized and annexed Crimea in 2014 and became involved in the ongoing conflict in eastern Ukraine.
Finland's Foreign Minister Timo Soini said Russia's actions constituted an “essential change” for Europe's security.
“The security policy environment of Finland, a member of the western community, has transformed,” the ministry wrote in its report, citing “a more tense security situation in Europe and the Baltic Sea region.”
“The use or threat of military force against Finland cannot be excluded,” it added although Soini stressed that Finland does not consider Russia to pose a threat “at the moment”.
Finland — which shares a 1,340-kilometre (830-mile) border with Russia — was attacked by its powerful neighbour during World War II but has tried to maintain friendly relations with Moscow ever since.
But tensions have grown around Finland, with Russian fighter jets buzzing around a US navy ship in the Baltic Sea in April and with NATO increasing its military presence and rehearsals in the area.
“We make no secret of our negative attitude to the NATO policy of moving its military infrastructure closer to our border and involving other states in its military activities,” Russia's foreign minister Sergei Lavrov told
reporters on Soini's recent visit to Moscow.
While Finland is not actively planning to join the defence alliance, Soini said it intended to “maintain the possibility of allying itself militarily” if need be.