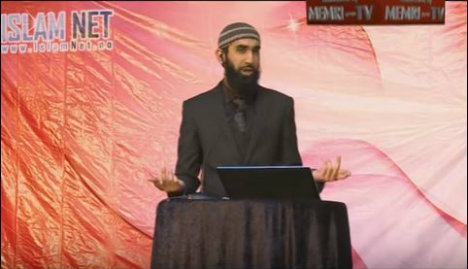 Islam Net, which was founded by Qureshi in 2008, holds information meetings across Norway – known for their separation of men and women – which, according to the organisation’s web site, aim to make information about Islam more accessible for the public.

In a recording from one such meeting in 2013, Qureshi appears to say that supporting the death sentence for homosexuals, as well as stoning to punish adultery, was not an extreme view for Muslims but a mainstream one.

Qureshi told NRK News Radio show Dagsnytt 18 on Thursday that the video had been misunderstood, and that he expressed himself in a way that could be misinterpreted.

The former engineering student referred to the context in which stoning is mentioned in Islamic law and said that such punishments did not fit with modern Norwegian society.

The Islam Net founder admitted that disagreement between Islamic scholars on legal questions is possible, but that it is not possible for anything in the Koran itself to be wrong. Qureshi added that he was not qualified to give a definite answer to the questions on punishments.

When asked by NRK interviewer Fredrik Solvang whether women should be obedient towards men, Qureshi eventually responded that he did not automatically have authority over women by virtue of being male.

The radio debate took place after the opposition Socialist Left (SV) party last week suggested that state funding should be withdrawn from all religious associations, since – according to SV – such associations practice social control and influence to repress individuals.

“We need a law like this. We do not currently have enough power to help those who are fighting against repression. There’s no reason to subsidise intolerance,” Lysbakken said during the programme.

Qureshi responded by saying that although he opposed the proposal, mosques and Muslim associations would be able to sustain funding through their members should it be withdrawn.

Qureshi's Thursday appearance on the radio programme can be heard here (in Norwegian). His 2013 comments can be heard below, in English.