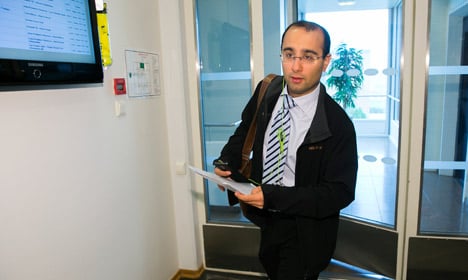 Amir Mirmotahari said that he only made the suggestion because he was under pressure from the defendant. Photo: Heiko Junge / NTB scanpix
Attorney Amir Mirmotahari, 38, who is accused of having planned the kidnapping and drugging of a rape victim, was arrested by Oslo Police on Thursday.
“The accused showed up at the police station with his attorney at 1.30pm. He is charged with obstruction of the judiciary system under especially aggravating circumstances under paragraph 132a of the Penal Code,” police superintendent Stein Olav Bredli said.
On Friday morning, Oslo Police requested that Mirmotahari be held in custody while police build their case.
The lawyer is accused of having planned the kidnapping of a rape victim, something he denies.
On Thursday, VG published an audio recording that appeared to reveal Mirmotahari’s plans to kidnap a rape victim and have her drugged in order to help free his client from rape charges. The plot never came to fruition and the Romanian rape suspect represented by Mirmotahari was sentenced to five years in prison.
“I can see that I have acted in a manner that is likely to harm lawyers’ professional reputation and will therefore discontinue my law practice with immediate effect,” Mirmotahari wrote in a statement published by VG.
His now discontinued law firm had seven employees.
“I understand that the recordings shock all who hear them. What I say in the conversation is very offensive to the woman concerned, and I apologize for that,” his statement continued.
According to VG, the aim of the alleged kidnapping plot was to keep the rape victim from appearing in court to give testimony so that the lawyer’s defendant would be acquitted. Mirmotahari has said that the audio recording has been taken out of context and that plan was never meant to be real.
“I thought that you, with your background, might have some possible solutions. What about if one should kidnap a person for a few days?” he is heard saying in the recording from May 2015, a week before he was to defend one of two Romanian men who were charged with having beaten and raped a 40-something drug addict in August 2013.
Mirmotahari said that he was under extreme pressure from the man who made the recording.
“I did say it. It sounds harsh, it's unfortunate. But it nothing ever happened anything,” the lawyer said.
Mirmotahari said that he and his family have had to live at a secret address because he has faced numerous threats.