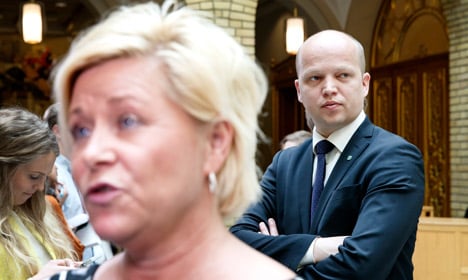 Finance Minister Siv Jensen (foreground) was opposed by Center Party leader Trygve Slagsvold Vedum. Photo: Gorm Kallestad / NTB scanpix
With a vote of 136 for and 29 against, parliament approved a bill that would tie Norway’s regulation of financial and insurance institutions to EU rules.
The final vote was enough to give the government the necessary three-quarters majority needed on matters that involve a loss of national sovereignty.
The bill means that the EFTA Surveillance Authority (ESA) will have the authority to verify that the Norwegian financial industry complies with EU rules.
Center Party leader Trygve Slagsvold Vedum opposed the bill and warned there will be no “real reviews” related to decisions that affect Norway. He further argued that just one individual will make the ESA assessments and said the passed bill was “a circumvention of the Constitution”.
See also: Norway's 'out-but-in', a model for Brexit?
The group Nei til EU (No to the EU) agreed, saying that parliament had gone against the will of the people.
“The government is tying us to institutions that we have said no to and we are approaching EU’s banking union at racer speed,” the group’s leader, Kathrine Kleveland said in a press release.
No to the EU pointed to a recent opinion poll from Sentio that showed just 26 percent of Norwegians supported the plan to tie Norway to the EU’s financial oversight. Some 12,000 people also signed a petition opposing the bill.
The group said that Monday’s action was “the biggest concession of sovereignty since the European Economic Area agreement” of 1994.
Finance Minister Siv Jensen, however, said she is confident that the bill will safeguard Norwegian interests.
“The solution we have found means that most of the supervision of the Norwegian financial industry will still be performed by the Norwegian Financial Supervisory Authority,” she said.
According to Jensen, only a “very small area” of authority is transferred to Brussels with the bill.
“This applies to supervision of credit rating agencies and some types of registries of securities transactions, which are types of institutions that we don’t have in Norway today,” Jensen said.