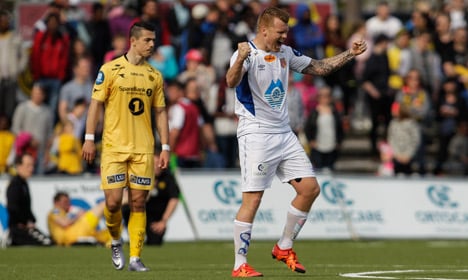 John Arne Riise celebrating a goal for Aalesund last month. Photo: Mats Torbergsen / NTB scanpix
The 35-year-old, who stepped down from national duty in 2013 with a record 110 caps for Norway, had been playing in recent months with Aalesund, the Norwegian club where he began his career in 1996.
“I feel that the joy, the flame and the desire are no longer strong enough for me to play at my top level,” Riise said on his official website. “I want to play football but the motivation is no longer enough for me to play at the highest level.”
Riise, who won the French Ligue 1 title with Monaco in 2000 and the Champions League crown with Liverpool in 2005, nevertheless left the door open for a possible return.
“If the desire, the joy or the urge returns in a month or two … It's not something that I'm thinking about now.”