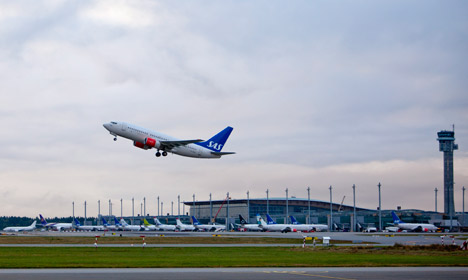 SAS and other airlines left Oslo Airport as planned on Friday after two possible strikes were averted. Photo: Paul Kleiven/NTB Scanpix
Negotiations between Norway’s Parat union and the Confederation of Norwegian Service Industries (NHO Service) ended successfully in the wee hours of Friday morning, just hours before the airport was scheduled to be shut down to all departures.
“As there will be no strike, we will remain open as usual, but there could be some minor delays as a consequence of the uncertain situation we have had leading up to the potential strike,” Oslo Airport’s head of communications, Joachim Westher Andersen, said in a press release.
Over 500 airport employees, including security guards and baggage handlers, had said they will would off the job at 6am on Friday if the labour negotiations weren’t successful by then.
Their last-minute agreement was good news for travellers, as Friday is predicted to be the second busiest day of the year thus far, with more than 90,000 people travelling to or from the airport and 42,000 of them passing through the security check.
Norway travellers also don’t have to worry about a threatened strike by Norwegian SAS pilots. The union representing 435 of the airline’s Norway-based pilots came to terms in a separate labour conflict on late Thursday afternoon. The agreement means that all SAS flights to and from Norway will go ahead as planned, according to a SAS press release.
However, the Norwegian pilots’ colleagues in Sweden have rejected a bid from a mediator on Thursday night. More than 350 Swedish pilots plan to go on strike at 18:00 Central European Time on Friday.
If no solution is reached the strike will start at 18:00 on Friday, impacting domestic flights in Sweden as well as routes within Europe. Flights in and out of Stockholm’s Arlanda airport would be affected.
SAS is fifty percent owned by the Danish, Norwegian and Swedish states.