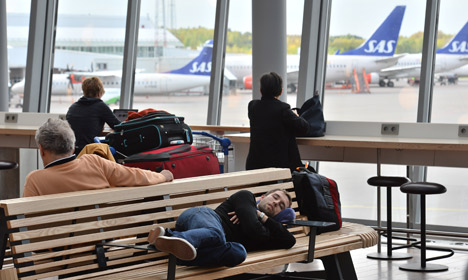 The strike would be particularly bad news for passengers at Stockholm Arlanda Airport. Photo: Johan Nilsson / TT / NTB scanpix
The Danish aviation news site Check-in.dk reported that the pilots could go on strike by the end of the week, but SAS spokeswoman Anna Vibeke Nielsen said she hopes it will be averted.
“Right now there are negotiations underway with the two Norwegian pilot unions and we are committed to reaching an agreement through a mediator,” Nielsen told Check-in.
Norwegian newspaper Dagens Næringsliv wrote that a sticking point between the two sides is the pilots’ summer work schedules. The airline said it has had to ground six of its European routes in the peak travel season because too many pilots have taken summer holiday.
If the talks are unsuccessful, 435 Norwegian pilots will go on strike effective Thursday morning while roughly 400 Swedish pilots are expected to follow suit on Friday. If the Swedes make good on their threats, it would have a significant impact on the airline’s long-distance flights in and out of Stockholm Arlanda.
According to Check-in, there is no indication that Danish pilots will also go on strike but flights to and from Copenhagen Airport could also be affected.
The looming work stoppage could be even larger than the one in February and March 2015, in which a total of 700 SAS pilots went on an 11-day strike at around the same time a strike by cabin personnel grounded scores of flights.
SAS is fifty percent owned by the Danish, Norwegian and Swedish states.