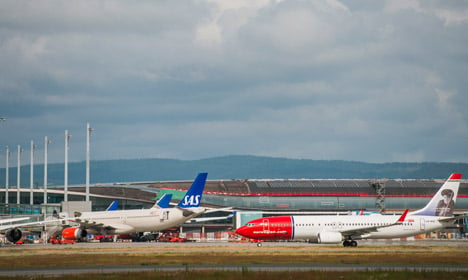 If the workers strike, all departing flights will be cancelled. Photo: Fredrik Varfjell / NTB scanpix
A conflict between Norway’s Parat union and the Confederation of Norwegian Service Industries (NHO Service) could completely shut down Oslo Airport for departures on Friday if the two sides cannot reach an agreement.
Over 500 airport employees, including security guards and baggage handlers, say they will walk off the job at 6am on Friday if labour negotiations aren’t successful by then.
Avinor, the company that runs Norway’s 46 state-owned airports, said it will have no choice but to ground all outgoing flights from Oslo Airport if the workers strike.
“With the extreme capacity reduction we are facing, the departures hall will quickly fill up, thus causing considerable security challenges. Our experience indicates that situations with such large crowds of people can be quite trying for some passengers, and we do not want a situation where we put travellers at risk,” said head of communications at Oslo Airport, Joachim Westher Andersen.
“Therefore, if there is a strike, we will shut down completely for departing passengers,” he added.
The potential strike comes as SAS pilots have also threatened to walk off the job in a separate conflict.
Passengers arriving at Oslo Airport as their final destination will not be impacted by Parat's potential strike, but those with connecting flights might face problems, Avinor said.
If the workers do strike on Friday, it will be on a very busy travel day. A total of 42,200 departing passengers are expected, one of the highest single-day figures in the airport’s history.
Avinor said that a departure shutdown at Oslo Airport “will have major consequence for Norwegian aviation, and cancellations and substantial delays must be expected”.
“Possible strikes have also been reported at several of Avinor's other airports – to varying degrees. Delays and consequences for travellers are also expected in these other locations,” the company wrote in a press release.