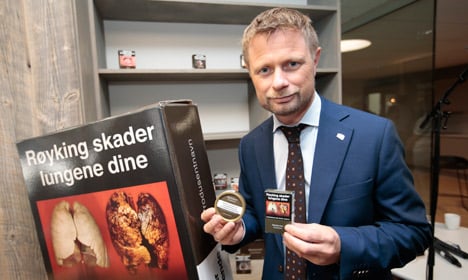 Health Minister Bent Høie said the plain packaging could be rolled out in 2017. Lise Åserud / NTB scanpix
The announcements, which coincide with World No Tobacco Day, mean cigarettes must be sold in drab boxes plastered with health warnings and gruesome pictures of smoking-related diseases.
“Plans by New Zealand and Norway to introduce plain packaging to reduce demand for tobacco send a powerful signal that this initiative works,” Oleg Chestnov, the World Health Organization Assistant Director-General for noncommunicable diseases told AFP in an email.
Plain packaging, which removes what is seen as a powerful tool used to get young people hooked on tobacco, “will save lives,” he insisted.
According to WHO, one person dies from tobacco-caused disease every six seconds, amounting to nearly six million people each year — a number expected to rise to more than eight million by 2030.
Norway's proposed legislation for plain packaging will also apply to snus, the smokeless tobacco popular in Scandinavian countries, Health Minister Bent Høie said.
“The objective of plain packaging is to prevent tobacco use among children and adolescents. I think most people support this goal. We know that young people are affected by the appearance and design of tobacco packaging, and it is time to stop this type of marketing to young people,” Høie said in a statement.
In New Zealand, associate Health Minister Sam Lotu-Iiga pointed out that “12 New Zealanders die prematurely every day from smoking-related illnesses.
“Each of these deaths is preventable,” he stressed.
Høie told news agency NTB that he's confident that the Norwegian parliament will approve the legislation, which he plans to present within the next few weeks.
“If parliament handles the issue before Christmas, I hope it will be implemented during the course of 2017,” he said.
'Going global'
In a new report, the WHO said data from Australia, the first country to introduce so-called plain packaging four years ago, showed the measure had a clear impact on the number of habitual smokers in the country.
With similar laws taking effect earlier this month in Britain and France, and a range of other countries discussing following suit, WHO voiced hope the push to remove logos and distinctive colours from cigarette packs is “going global”, despite strong opposition from the tobacco industry.
“Plain packaging reduces the attractiveness of tobacco products,” WHO chief Margaret Chan said in a statement.
Imposing neutral cigarette packs, she said, “kills the glamour, which is appropriate for a product that kills people.”
Smoking in Australia has been steadily declining for years, but WHO said 0.55 points out of a total 2.0-percentage point drop in the three years after the law was introduced in December 2012 could be directly attributed to the neutral packaging.
That equates to more than 108,000 people quitting, not relapsing or not starting to smoke during the period, said the report, citing Australian statistics.
WHO said it hoped the data would help inspire more countries to climb aboard.
The new packs sold in Australia, and being phased in in Britain and France are intentionally ugly, covered with graphic health warnings, with no promotional information allowed and brand and product names displayed in standard colour and font size.
Plain packaging is only one of many tactics called for in WHO's 2005 Framework Convention for Tobacco Control aimed at reducing tobacco consumption, alongside protecting people from exposure to tobacco smoke, banning tobacco advertising and sales to minors, and requiring health warnings on all products.
Big Tobacco
The tobacco industry fought particularly hard to block the introduction of plain packets, and has mounted numerous legal challenges against countries seeking to impose them.
Høie told NTB that he expects “the tobacco industry to use all of its means to fight this in Norway”.
New Zealand first proposed plain packaging in 2013, but it was put on hold pending the outcome of tobacco giant Philip Morris' legal action against the Australian government's introduction of the packets a year earlier.
That lawsuit failed last December, and tobacco giants Philip Morris International, British American Tobacco, Imperial Tobacco and Japan Tobacco International (JTI) also failed earlier this month to block the British legislation.
New Zealand Prime Minister John Key admitted Tuesday the fact that so many countries were adopting the packaging had emboldened his government to ignore the threat of legal action from Big Tobacco.
“They may well take a case against the government, but the advice we have been getting over time now has been that the risks of them being successful… is reducing,” he told reporters.
“The industry fights hardest against the measures that are most effective,” Douglas Bettcher, who heads WHO's non-communicable disease prevention unit, told reporters in Geneva ahead of the report launch.
Plain packaging, he said, was so effective because it “very clearly labels tobacco for what it is: the only legally available product worldwide that when used as intended, kills up to half of its users,” he said. 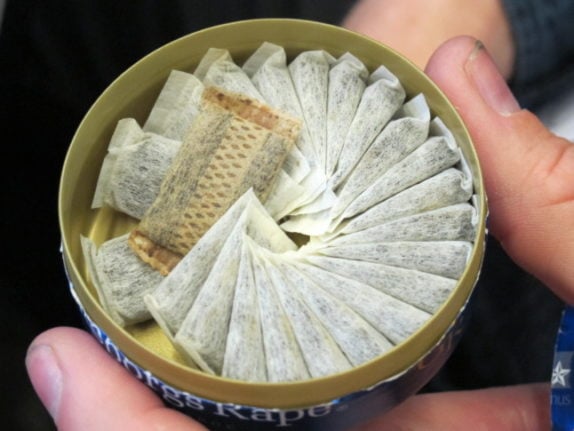 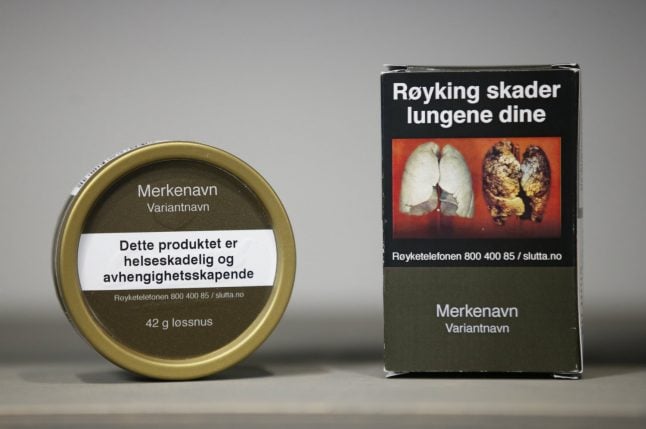 TOBACCO
Branded Norwegian cigarettes and snus to be consigned to history 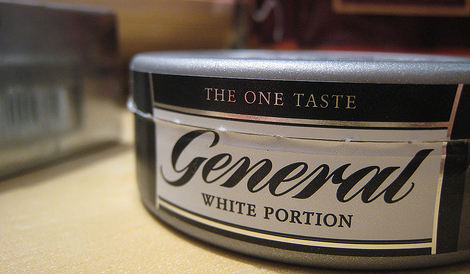 Swedish Snus - Stefanos Kofopoulos
"We have a solid observational basis for the claim that the availability of snus appears to be more positive than negative for the population's health," the study's main author Karl Erik Lund, told The Local.   "If the aim is to reduce tobacco-related mortality, letting snus compete with cigarettes is a good idea."
Lund's article, published in July in the journal Alcohol and Drug policy, summed up the results of the research programme Sirus has been running on snus tobacco since 2006.
According to Lund's research,  snus's market share in Norway has increased from five percent in 1985 to 30 percent today, without an overall increase in the consumption of tobacco.
"The use of snus has not increased overall tobacco consumption but has reduced cigarette smoking in Norway, and this has happened without more people becoming new users," he said.
That was not to say that snus tobacco had no negative impact on health.
"It’s very important to stress that snus is not a totally risk-free product. There’s no reason why youth should take up snus if they’re not trying to get out of the very dangerous cigarette smoking habit," he said.
But comparing the "way lower" rate of tobacco-related mortality in Sweden, where half of tobacco consumption is in the form of snus, to neighbouring Denmark, where snus cannot be sold legally, starkly demonstrated the benefits.
He denied that his research was in any way influenced the the tobacco industry.
"There’s a lot of hostility against any type of tobacco products, but we have to relate to our results. We’re not taking any money form the tobacco industry or the pharmaceuticals industry. We’re 100 percent funded by the Norwegian government."
"The aim should be to combat mortality, and there both snus and electronic cigarettes can play an important role," he said.
SHOW COMMENTS 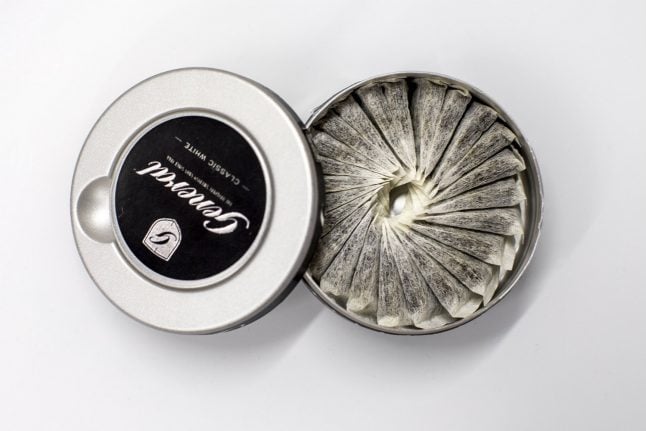 SMOKING
Snus is now more popular than smoking in Norway 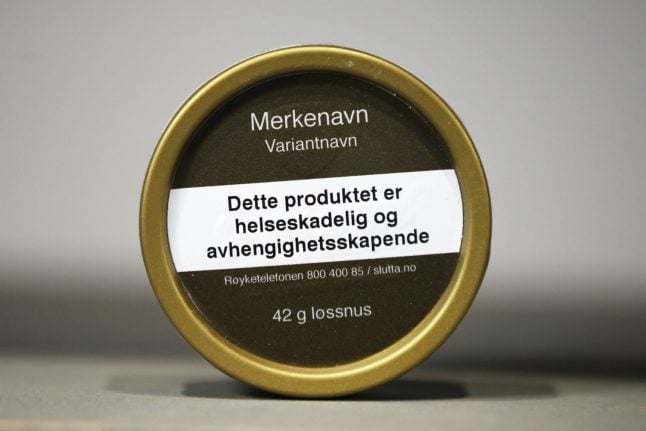