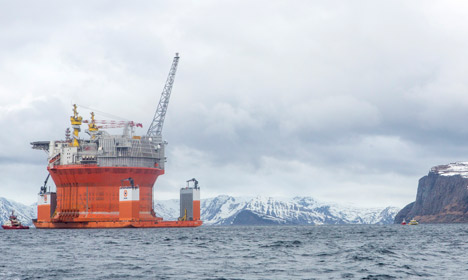 Photo: Jan-Morten Bjørnbakk / NTB scanpix
It is the first time since 1994 that the country has opened a new sector to the oil industry, and comes as Norway's output has halved since 2000 and as a collapse in crude prices has slashed state revenues.
Three of the ten licences, which consist of 40 blocks in total, are in the immediate vicinity of the maritime border with Russia, in an area that the two countries long disputed before an accord was concluded in 2010.
The drilling rights to two of them were awarded to state oil giant Statoil, including one which covers the most northern block ever opened to oil exploration in Norway.
The third went to another Norwegian group, Det Norske, with Russia's Lukoil taking a major stake.
“Today, we are opening a new chapter in the history of the Norwegian petroleum industry,” Petroleum and Energy Minister Tord Lien said in statement.
“For the first time in 20 years, we offer new acreage for exploration. This will contribute to employment, growth and value creation in Norway. Northern Norway is now in the forefront of further developing the Norwegian petroleum industry.”
Ice-free thanks to the Gulf Stream, the areas that are open for exploration, in particular those close to Russia, are considered promising.
Statoil said it planned to begin drilling next year.
“There is always uncertainty related to probability of discovery in new areas,” Jez Averty, Statoil's senior vice president for exploration, said in a statement.
“But if we make a discovery, it may involve considerable resources. Exploring in such areas and making substantial discoveries are vital if the [Norwegian Continental Shelf] is to maintain its production”.
But the decision has upset environmental groups, who complained that the new blocks are too close to the ice floes.
“We cannot risk another Deepwater Horizon in the Barents Sea,” an area with a rich but fragile ecosystem, said Truls Gulowsen, the head of the Norwegian branch of Greenpeace.
The US government estimated that 4.9 million gallons of oil spilled from the seabed after the BP-leased Deepwater Horizon oil platform in the Gulf of Mexico suffered an explosion on April 20th, 2010 that killed 11 people.
The spill is widely viewed as one of the worst environmental disasters in history.
Gulowsen noted that at the COP21 climate change conference in Paris in December, “leaders from the whole world committed to maintaining the rise in temperatures to under 1.5 degrees”.
“If we want to achieve that objective we cannot look for oil and natural gas in the Arctic,” he said.
Among the other companies awarded licences are Sweden's Lundin, represented in five of the 10 licences, US groups Chevron and ConocoPhillips and Britain's Centrica.