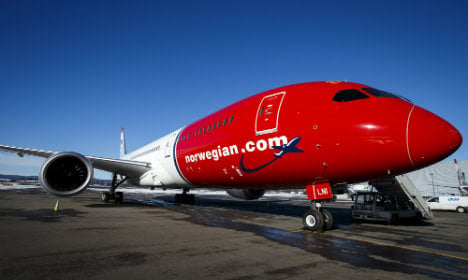 “It means that we are closing in on the opening of even more routes for our Irish subsidiary company,” Norwegian’s director of communications Anne-Sissel Skånvik told NRK in April.

“We have been planning routes between Ireland and the US for a long time, Skånvik continued.

But a new proposal could now put this in reverse, according to a report in The Economist, with four House of Representatives lawmakers seeking to block Norwegian’s expansion with a new bill.

The lawmakers have raised concerns about unfair commercial advantages, citing similar protests by other airlines and trade unions.

European low-cost airlines such as Norwegian use low labour costs as one way of keeping their fares low – a model that has seen low-budget rivals such as Ryanair run into controversial disputes with politicians and unions in neighbouring Denmark.

However, the low-cost supply that the likes of Norwegian and Ryanair create promotes tourism and business spending throughout their areas of operation, primarily Europe, says the Economist report.

Norwegian currently provides only two percent of the market share for transatlantic flights, while Delta Air Lines, American Airlines and United Airlines dominate with a combined 79 percent, once their European joint venture partners are included.

US lobbyists have also complained that Norwegian’s application was for a subsidiary company registered in Ireland, enabling Norwegian to circumvent strict labour laws in Norway.

“It has taken longer for us than for other airlines. Our competitors have controlled the market for decades, and they are using all their influence to prevent a low-cost airline with brand new aircraft from entering the market,” Skånvik told NRK in April.

Last summer, Norwegian’s CEO Bjørn Kos wrote to US Secretary of Transportation Anthony Foxx and Secretary of State John Kerry, highlighting the benefits to jobs and employment should the licence be granted.

“It is high time that the American Department of Transportation finally agrees to approve our application for permission [to operate extended transatlantic routes], which we have said all along is in keeping with the Open Skies agreement between Europe and the U.S.A,” Kos said in a press release after the application was initially approved last month.

The 2007 Open Skies agreement between the US and the EU allows any American or European airline to fly from any point in one region to any point in the other. Its aim was to increase competition from the private sector by weakening the oligarchy of the main national carriers. The impact of the agreement was, however, limited following the 2008 global economic crisis.

The DoT’s final decision on Norwegian’s application could be the last chance for the Scandinavian low-cost airline to make its mark on the transatlantic market.