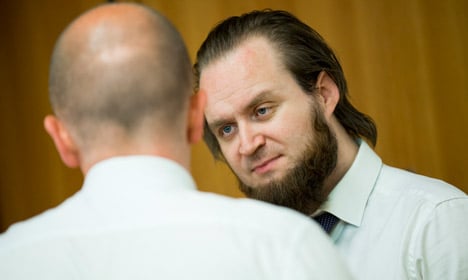 Nils Christian Nordhus, the lawyer defending one of the suspects, talks with fellow defence lawyer Svein Holden in Oslo District Court on Wednesday. Photo: Vegard Wivestad Grøtt / NTB scanpix
The 23-year-old, a Chechen living in Oslo, is on trial for making a terror pact with a 46-year-old Norwegian-Pakistani man. The man said he would not tell the Oslo District Court on Wednesday exactly what it was he had seen that made him want to leave Syria unless the court granted his request to hold parts of his testimony behind closed doors.
His lawyer Svein Holden lamented the fact that the request was denied.
“That means that the court will not get to hear about this incident nor about what he said to the Isis leaders to be allowed to leave. He will only give testimony about these two things behind closed doors,” said Holden.
The 23-year-old said that the incident was something he observed on a motorcycle ride along with an 18-year-old Isis recruit.
“What I saw was contrary to my view of what Islam is. It was not right,” he said.
Urged by friends
The 23-year-old man came to Norway from Chechnya at the age of 15 with his father. Dressed in a jacket, shirt and dark denim pants he told the court in a subdued and articulate manner how he prepared for his journey to Syria in spring 2014 by training himself and undergoing laser eye surgery to avoid being dependent on contact lenses in Syria.
He kept his plans hidden from family and certain friends whom he thought would try to stop him if they knew he planned to go.
The man said he was inspired to go to Syria by friends in Fredrikstad who either already had gone there or who planned to. The aim was to help the civilian population, he explained.
In his circle of friends was the well-known Syria fighter Abu Aluevitsj Edelbijev (23), whom PST believes was killed while fighting for Isis in December 2014.
Edelbijev was one of those who urged the 23-year-old Chechen to go to Syria.
“He said it was a holy war, and my duty as a Muslim to help,” explained the 23-year-old.
Son convicted
After Ramadan in 2014, he decided to go to Syria. That is when he learned that his co-defendant, a 46-year-old family man who was also from Fredrikstad, was also planning to become a foreign fighter.
“I was surprised, since he had not been concerned about this or religion earlier. But I said that we could travel together,” the Chechen said, adding that he had known the other man’s 24-year-old son, who last year was sentenced to eight years in prison for having fought for Isis in Syria.
The 46-year-old has admitted going to Syria in August 2014, but claims he wanted to join another legitimate part of the resistance movement, not Isis.
The man testified that he belatedly realized that he had ended up in an Isis camp and then played sick to escape.
The 23-year-old gave the court a detailed description of life for newly arrived recruits in an Isis camp. All recruits had to go through a month of religious training with a rigid itinerary before moving on to a month of military training.
“It is the first time we have such a detailed account of life inside an Isis camp in a Norwegian court,” terror researcher Lars Gule told NTB.