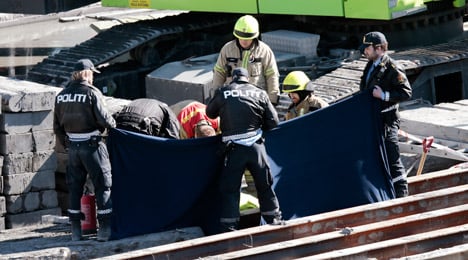 The man's body was found in afoundation of the new Munch museum. Photo: Lise Åserud / NTB scanpix
Police found the body on April 21st at a construction site where a new gallery for iconic artist Edvard Munch is being built in Oslo.
Following a two-week investigation police now say that the man was not the victim of a crime.
See also: Mystery over dead Swede found in pipe in central Oslo
“We have carried out technical investigations and have spoken with witness with various connections to the case. We’ve also had a dialogue with the Swedish police. The sum of what we have been able to discover leads us to believe that it was an accident,” spokesman Stein Olav Bredli told Aftenposten.
Police had previously suspected that the man purposely put himself in the pipe, but Bredli said he would not give further information on why investigators believe that the death was the result of an accident.
The man has been identified as a Swedish citizen in his 30s who had been living in Norway for some time before his death. Although he was not identified publicly, his relatives have been informed of his death.
The man’s body was found in a 70cm diameter pipe that was part of the foundation of the new Munch museum. Officers had to use a blow torch to remove the man's body.