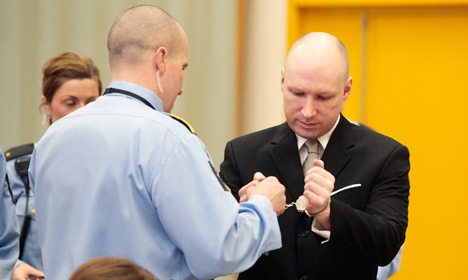 The Oslo District Court last week sided with the convicted terrorist's claims that spending between 22 and 23 hours each day in isolation in the Skien prison violates his human rights under Article 3 of the European Convention on Human Rights, which prohibits “inhuman or degrading” punishment.

“The court… has concluded that the prison conditions constitute inhuman treatment,” the Oslo District Court said in a written statement, noting that the rightwing extremist had been held in isolation for almost five years.

On Tuesday, the state said it would fight the decision on the grounds that it disagreed with both the court's interpretation and the evidence presented in the case.

Although Anundsen announced Norway's intention to appeal against the decision, the formal appeal has not yet been formulated or submitted. The state said it would file the paperwork within the 30-day deadline.

Breivik, 37, claimed at the March hearing into his lawsuit that his almost five-year isolation confinement violated the European Convention on Human Rights.
The court agreed with the far-right extremist, saying that the conditions — which include games consoles, workout machines and three cells at his disposal for his various activities — violated his rights.
“The prohibition of inhuman and degrading treatment represents a fundamental value in a democratic society. That applies no matter what, including in the treatment of terrorists and murderers,” the court statement read.
However, the court ruled against the domestic terrorist on his claim that the strict controls on his correspondence also amounted to a violation of Article 8, which guarantees the right to a private life.
His lawyer, Øystein Storrvik, said Breivik would not appeal against the Article 8 ruling.
As part of the ruling, the state was ordered to pay Breivik's case costs of some 330,000 kroner ($41,000, €36,000).
The warden of Skien prison, Ole Kristoffer Borhaug, told AFP last week that there would be no immediate changes to Breivik's conditions as “the judgment is not yet enforceable”.
Breivik is serving a maximum 21-year sentence — which can be extended if he is still considered dangerous — for killing eight people in a bombing outside a government building in Oslo and then shooting dead another 69, mostly teenagers, at a Labour Youth camp on the island of Utøya on July 22nd, 2011.