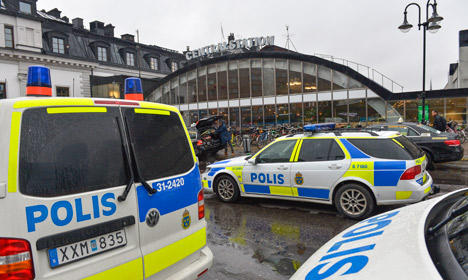 File photo of police at Stockholm Central Station. Photo: Jonas Ekströmer/TT / NTB scanpix
Norwegian police are evaluating the Norwegian Royal Family’s planned attendance at a 70th birthday celebration for Swedish King Carl Gustaf following a report that a group of Isis fighters are planning to attack civilian targets in Stockholm, according to broadcaster NRK.
See also: Iraq says 'Isis terrorists targeting Stockholm'
King Harald, Queen Sonja, Crown Prince Haakon, Crown Princess Mette-Marit, Princess Märtha Louise and her husband Ari Behn are scheduled to attend Carl Gustaf’s weekend birthday celebrations in Stockholm.
Neither the Swedish or Norwegian royals would comment on the security situation and directed questions to the police.
On Tuesday it was reported that Sweden’s security service Säpo had received information indicating that a group of seven to eight Isis fighters have made their way to Sweden and are planning to strike against civilian targets in Stockholm.
Swedish newspaper Expressen speculated that the terror threat may have already been known on Monday, given the massive police presence when the Swedish royals attended a theatre performance in central Stockholm.
The Swedish Royal Court declined to comment on Monday’s security situation.
A spokesman for the Oslo Police told NRK that the district has been in contact with both Swedish and Norwegian authorities and would keep a close eye on the terror threat.
After several news articles about the royals’ planned trip to Sweden, the police said that comments made about the security situation in Stockholm were meant generally and not in direct connection to the weekend celebrations.
“We have not said that we are evaluating the royal family’s trip to Sweden,” the police wrote on its website following the initial reports.
The Norwegian Royal Family is scheduled to participate in Swedish King Carl Gustaf’s birthday celebrations on Saturday and Sunday. Denmark will also be represented by Queen Margrethe, the Crown Prince Couple and Princess Benedicte.