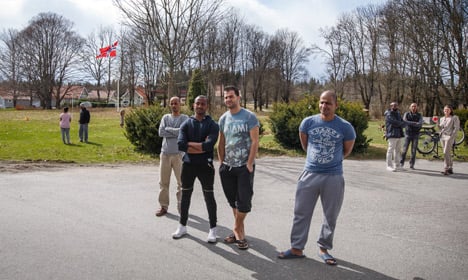 Asylum seekers at the Bjørnebekk asylum centre in Ås. Photo: Heiko Junge / NTB scanpix
UDI will offer an additional 10,000 kroner to the first 500 asylum seekers who apply for a voluntary return to their home countries. Beginning on Monday, the offer will run for six weeks on a first-come, first-served basis.
“We need to entice more to voluntarily travel back by giving them a bit more money on their way out. This will save us a lot of money because it is expensive to have people in the asylum centres,” Integration Minister Sylvi Listhaug told broadcaster NRK.
The offer entails giving asylum seekers an additional 10,000 kroner in travel expenses on top of the 20,000 kroner already offered.
See also: Asylum seekers want to leave – if Norway pays
UDI reported in December that an increasing number of asylum seekers are interested in taking Norway up on its offer to fund a return trip home due to long family reunification waiting times and barriers to taking work or starting an education.
According to UDI, a family with two children can receive upwards of 80,000 kroner ($9,300 or 8,600 euros) in addition to the travel expense coverage.
To qualify for the additional 10,000 kroner to cover travel costs, asylum seekers must have arrived in Norway prior to April 1st and must not have overstayed their legal length of stay.
UDI said the goal of the bonus was to stimulate a faster voluntary return of those asylum seekers who do not have a legitimate protection claim in Norway. The bonus scheme will be marketed via displays and posters in 31 municipalities.