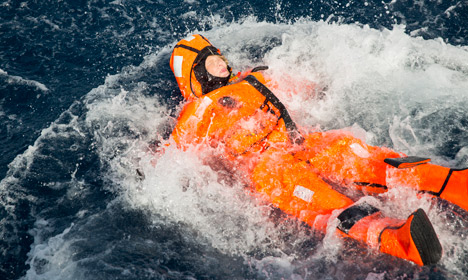 Listhaug's 'rescue' stunt didn't go down well with many Twitter users. Photo: Tore Meek / NTB scanpix
Listhaug, a Progress Party member known for her hard-line stance, pulled off the stunt off the coast of Lesbos as a way to familiarize herself with the rescue work carried out by the crew of the Norwegian ship ‘Peter Henry von Koss’.
She said that by floating in the sea she would also get a chance to see things from the perspective of migrants who risk their lives crossing the sea to Europe.
“You can’t put yourself into the same situation as the refugees but you can see it from that perspective [and experience] how it is to be in the water that way,” she told NTB.
“They don’t have a survival suit, so it’s not comparable,” she added.
But if she was hoping to express sympathy for migrants and refugees, the mission appears to have failed.
Social media was ablaze with reactions to photos of the minister floating in the water in a full-body suit.
“How about opening the window to really know what it’s like to be homeless?” Karin Andersen from the Socialist Left Party tweeted.

“Today I’m going to sit in a chair for five minutes so I can really feel what it’s like to be paralyzed,” lawyer Brynjar Meling tweeted.

“Next week: Sylvi Listhaug will experience what it’s like to be blind by shutting her eyes,” tweeted Morten Øverbye.

Others used the stunt as an excuse to show off their Photoshop skills.

Others took to Twitter to say critics were suffering from “Listhaug Derangement Syndrome.”

“Should she have drowned in order to experience what it's like to be a refugee?” asked media critic George Gooding.

The minister defended herself against the criticism by saying that she wanted to pay tribute to the Norwegian rescue workers who have saved migrants from drowning.

“I spoke with the crew, who told me horrible stories. They are heroes who have saved over 3,000 people. When I was asked to see how they operate, of course I said yes. It would have been completely rude not to have done it,” she told TV2.