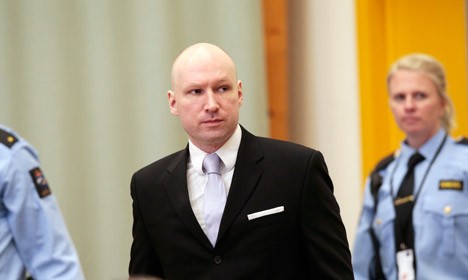 Prison officials said Breivik wouldn't be let out of isolation until the state decides whether it will appeal Wednesday's decision. Photo: Lise Åserud/NTB Scanpix
Breivik won a partial victory over the state on Wednesday when the Oslo District Court ruled that being kept in isolation violates his human rights. Now that the stage has been set for the far-right extremist to have more contact with his fellow inmates, a spokesman told broadcaster NRK that no one wants anything to do with the man who killed 77 people in 2011.
See also: Breivik wins over Norway in prison lawsuit
“There aren’t very many who will speak with him. We don’t talk much about him because we are tired of him – plain and simple. He is a prisoner and he is a bad man. It’s that simple,” the unnamed spokesman said.
Although Breivik is unpopular with his fellow inmates, the spokesman said that the domestic terrorist’s life would not be in danger if he is released from isolation.
“No one is interested in serving an extra 20 years for him. But there are people in here who have received a beating here and there and no one feels too bad about that,” he said.
Since his arrest nearly five years ago, Breivik has spent between 22 and 23 hours of each day in isolation. That is likely to change following Wednesday’s court decision, although just when he will be let out of isolation is uncertain.
The warden of Skien prison, Ole Kristoffer Borhaug, told AFP that there would be no immediate
changes as “the judgment is not yet enforceable”.
The state has not yet said whether it would appeal against the court's decision, which shocked many.
Breivik is serving a maximum 21-year sentence — which can be extended if he is still considered dangerous — for killing eight people in a bombing outside a government building in Oslo and then gunning down another 69, most of them teenagers, at a Labour Youth camp on the island of Utoya on July 22nd, 2011.
In prison, Breivik has three cells at his disposal, which are equipped with two showers, two televisions, an Xbox, a Playstation, a typewriter, books and newspapers.
Breivik also said his right to a private life had been violated and challenged restrictions on his mail and prison visits. Both of those points were rejected by the court.