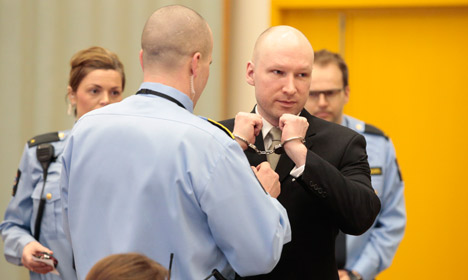 The court sided with the convicted terrorist's claims that being held in solitary confinement in the Skien prison violates his human rights under Article 3.

“The court… has concluded that the prison conditions constitute inhuman treatment,” the Oslo District Court said in a written statement, noting that the rightwing extremist had been held in isolation for almost five years.
As part of the ruling, the state will have to pay Breivik's case costs of some 330,000 kroner ($41,000, €36,000).
The 37-year-old far-right extremist claimed at the March hearing into his lawsuit that his almost five-year isolation confinement violated the European Convention on Human Rights.
The court agreed, saying that the conditions — which include games consoles, workout machines and three cells at his disposal for his various activities — violated his rights under Article 3 of the European Convention on Human Rights.
“The prohibition of inhuman and degrading treatment represents a fundamental value in a democratic society. That applies no matter what, including in the treatment of terrorists and murderers,” the court statement read.
However, the court ruled against the domestic terrorist on his claim that the strict controls on his correspondence also amounted to a violation of Article 8, which guarantees the right to a private life.
His lawyer, Øystein Storrvik, said Breivik would not appeal against the Article 8 ruling.
Breivik is serving a maximum 21-year sentence — which can be extended if he is still considered dangerous — for killing eight people in a bombing outside a government building in Oslo and then shooting dead another 69, mostly teenagers, at a Labour Youth camp on the island of Utøya on July 22, 2011.
Disguised as a police officer, he spent more than an hour hunting down the almost 600 youths trapped on the small island.
He put a bullet in the head of most of his victims, some of them up-and-coming leaders of Labour, Norway's dominant political party, which Breivik blamed for the rise of multiculturalism.
Breivik used the four-day hearings — held in the gymnasium of Skien prison, about 130 kilometres (80 miles) southwest of Oslo, where he is held — to promote his extremist views.
After making a Nazi salute on the opening day of proceedings, he claimed he was now a Nazi who had renounced violence and even compared himself to Nelson Mandela.
Since his arrest on the day of the attacks, Breivik has been held apart from other prisoners and his contacts with the outside world, including visits and correspondence, have been strictly controlled.
Storrvik told the hearing the case was important as Breivik would probably spend the rest of his life behind bars.
Breivik said his solitary confinement had had negative effects on his health. But doctors, psychiatrists and prison staff who examined him in prison testified they had seen no major change in his physical or mental state due to jail conditions.
Norway prides itself on a humane prison system aimed more at rehabilitation than punishment, and Breivik's conditions are considered comfortable by most.
The judges heard how Breivik has three cells at the Skien Prison — one for living, one for studying and one for physical exercise. He also has a TV with a DVD player, a games console, a typewriter, and books and newspapers.
The prisoner is “extremely dangerous” and must not be allowed to communicate with supporters who may carry out new attacks, authorities said, as they defended their use over the years of handcuffs, strip searches and strictly-controlled correspondence and visits.