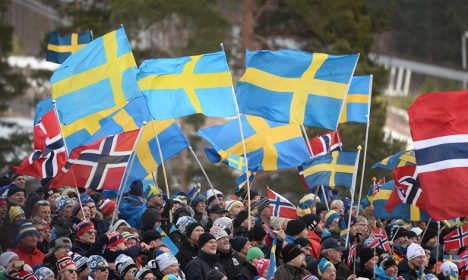 What do two percent of Norwegians have against Sweden? Photo: Fredrik Sandberg/TT

A visit to the royal palace, a potential meeting with Zlatan Ibrahimovic and the rest of the national football team and a private tour of Gothenburg theme park Liseberg. That's what a Scandinavian tourism group may have in store for the Norwegian brave enough to sign up for a trip to Sweden.

The rather odd campaign, 'Zero Vision' (inspired by Swedish campaign 'nollvisionen' to cut the number of road fatalities to zero), was launched after figures showed that two percent of all adult Norwegians had never visited Sweden, prompting the Swedes to say: “well, we can't have that”.

“We think it is sad that there are Norwegians who haven't visited our great country,” said Sweden's ambassador to Norway, Axel Wernhoff, behind the campaign together with VisitSweden.

“Therefore, we have decided on a zero vision. Nobody should be without a Sweden visit. We know that thousands of Norwegian would like to have been to Sweden, and now we want to invite them,” said Sweden's ambassador to Norway, Axel Wernhoff, behind the campaign with VisitSweden.

READ ALSO: What do Swedes really think of Norwegians?

Norway was in a union with Sweden until it seceded in 1905. Nowadays the friendly rivalry between the two countries is usually limited to winter ski championships and tongue-in-cheek jokes about the stupidity (directed at the Norwegians) or stuck-up-ness (the Swedes) of their neighbours.

But tourism bosses hope that the drive will capture the attention of one of those 68,000 Norwegians who have never strayed across their eastern border, not even to take advantage of cheaper prices in Sweden.

They are inviting people to sign up online for the week-long trip this spring or summer. And the winner had better like Sweden, because they will afterwards be asked to participate in a press conference on June 6th, which is the national day of Sweden, to try to talk his or her compatriots into coming to Sweden as well.

“We wish that everyone who wants to should be allowed to visit our country. If we can't show everything to everyone, we at least want to make sure that we give extra attention to one representative, a kind of Sweden pioneer,” said VisitSweden's Norway head Thomas Johansson.

“Hopefully we'll find Sweden virgins who want to go on a trip.”