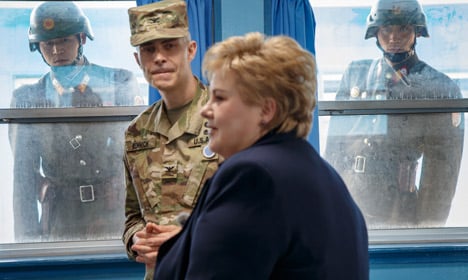 North Korean soldiers look on as PM Erna Solberg speaks with Colonel James Minnich. Photo: Heiko Junge / NTB scanpix
Earlier in the day North Korea had launched another missile – apparently to signify the birthday of the country’s “eternal president” Kim Il-sung.
The launch was a failure but it did nothing to improve the climate between North and South Korea, two countries who are still technically at war with one another 64 years after a ceasefire was signed.
“It’s a very special feeling to be here, in the middle of one of the most tense borders in the world. It’s also strange that people come and take photos like I’m some sort of animal in a cage. And it’s clearly better to be on this side,” Solberg told NTB from within the South Korean border station.
Video footage from broadcaster NRK showed North Korean soldiers both taking photos of the Norwegian delegation and apparently waving to the video cameras pointed in their direction.
Solberg’s border crossing happened within the Joint Security Area in a building referred to as T2. The centre line of the demilitarised zone runs right through a table in the middle of the room. This is where representatives from North and South Korea meet to talk, although that hasn’t happened since 2002.
It was anticipated that North Korea would send soldiers to spy on the Norwegian delegation’s arrival. Security forces on the southern side were noticeably wary when a third North Korean soldier arrived, followed by a small squad of others.
During Solberg’s visit on Friday, propaganda music could be heard blaring from speakers on both sides of the border. The tense mood stood in contrast to the otherwise peaceful atmosphere in which chirping birds were heard during breaks from the music.
“They shot a missile today. It seems like firing missiles is their way to highlight their strength. But with today’s launch failure, it wasn’t such a good celebration,” Solberg told NTB.
Despite Friday’s failed launch, Solberg said she views North Korea as a serious threat.
“The experts say that there is a fairly advanced nuclear programme in North Korea. Added to that is their missile capacity and a very unpredictable regime. All of this together suggests that there is a real threat,” she said. 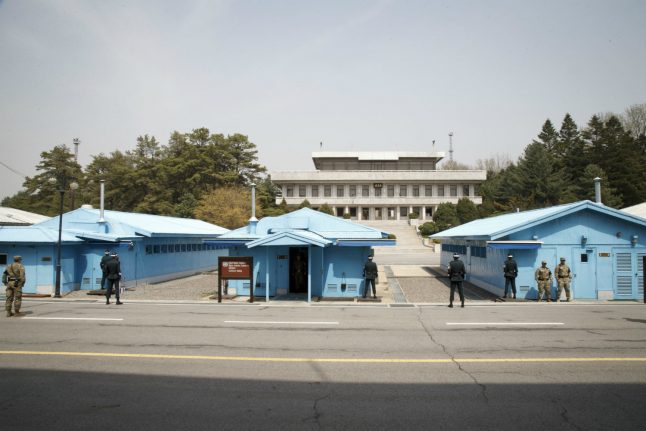 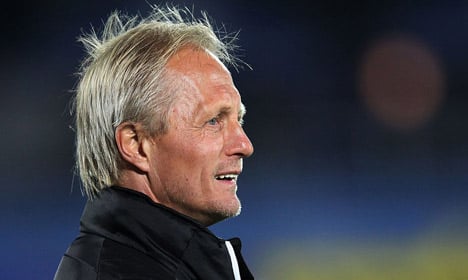