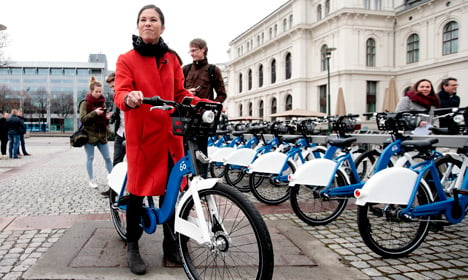 City Councilwoman Lan Marie Nguyen Berg (pictured) said the scheme's goal is to get more people to ride bikes, regardless of their income. Photo: Lise Åserud / NTB scanpix
Oslo City Council gave up to 5,000 kroner towards the purchase of new expensive electric bicycles to 1,019 different people. Among them were the absolute top of society, including multi-millionaires and CEOs, according to a report in Dagbladet.
One of the recipients of the city funds was 65-year-old Richard Andvord, whose net worth was valued at 93 million kroner in 2012. Another was well-known businessman and ship owner Morits Skaugen.
Skaugen, whose wife also received 5,000 kroner towards the purchase of an electric bicycle, said his personal wealth should not factor in to the discussion.
“It’s not relevant criticism and is an entirely different debate,” he told Dagbladet.
Others to receive the city’s financial support included high-profile journalists and editors of publications including Dagbladet and Nettavisen.
Nettavisen’s editor Gunnar Stavrum claimed he took the money just to show the “insanity” of the city’s electric bike support scheme.
“I think it’s meaningless to give economic support to buy electric bikes. It’s a dumb plan because it makes it more profitable to buy an electric bike instead for the most environmentally-friendly option, a [normal] bicycle,” he told Aftenposten.
While Norwegian media reports were highly critical of the financial assistance being given to those who clearly did not need it, City Council member Lan Marie Nguyen Berg said the subsidy programme is designed to get more people to leave their cars behind and take a bike instead.
“That’s valid regardless of whether you are rich or poor. Now we will evaluate the programme and see if it has had its desired effect,” she told Dagbladet.