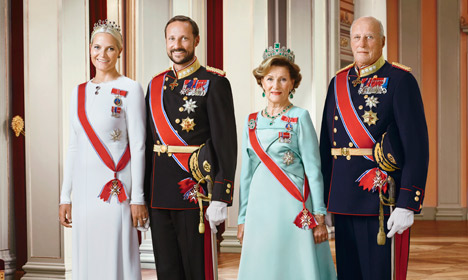 The Norwegian Royal House: Twice as expensive as believed? Photo: Det kongelige hoff Jørgen Gomnæs / NTB scanpix
The annual state budget allots 232 million kroner under the heading ‘the Royal House’, but Dagbladet found an additional 117 million kroner in spending on the royals distributed to other items. Along with the estimated 110 million spent on police escorts, it brings the actual price tag up to at least 459 million kroner ($55 million, €48.5 million).
The budgets for royal bodyguards is kept secret by the police, but Dagbladet collected information on expenditures and staff from a variety of sources.
The Royal House expenses have increased dramatically in recent years, the newspaper reported. The total cost of the monarchy has grown by about 37 percent in just six years while the royals’ salary payments have more than doubled since 2002.
In addition to the security escorts, the extra millions in Dagbladet’s calculations include the royal youth, personal military adjutants, royal estates and official strips abroad. Those costs are split amongst the budgets of the responsible ministries rather than being included in the overall budget item for the royals, Dagbladet said.
A spokesman for the Ministry of Finance, which is ultimately responsible for the national budget, said he could not confirm Dagbladet’s calculations.
“The Royal House’s total expenditures for 2016 are 232 million,” senior advisor Tor Martin Bærum insisted.
A spokeswoman for the Royal House of Norway said she “could not vouch for Dagbladet’s estimates”.
Dagbladet presented its figures to economy professor Jarle Møen at the Norwegian School of Economics (Norges Handelshøyskole), who said he was surprised by the lack of transparency surrounding the royals’ actual costs.
“It shouldn’t happen that nearly half of the total is missing when you ask about the costs of the Royal House to the state. Maybe it’s not obvious where all of the costs should be classified and groups, but it shouldn’t be so difficult to give a complete overview,” Møen said.
Following Dagbladet’s report, several Norwegian politicians called on the state to combine all royal costs into one line item in the national budget.
“The whole budget should be presented visually in a way that people can see all of the income and expenditures for the entire budget. That is also important to combat corruption,” Heidi Nordby Lunde of the government coalition partner the Conservatives (Høyre) told Dagbladet.

ROYAL
Prince William and Kate are coming to Sweden and Norway
Url copied to clipboard!