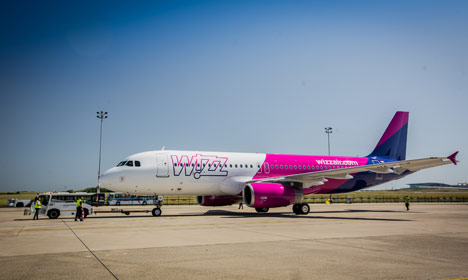 The drunk passengers will not be allowed on a Wizz Air flight again. Photo: Wizz Air
Airline personnel said that the two drunk passengers created a disturbance by smoking e-cigarettes, playing loud music and behaving boorishly toward other passengers and crew.
Hordaland Police tweeted that there were five drunken passengers on the flight but later told Bergens Tidende that only two were taken into custody.
“We showed up at the gate and took two drunk Polish residents into custody. They are now sitting in a police examination,” spokesman Morten Kronen told the newspaper.
See also: Norwegian whisky lover jailed for fight threat
Wizz Air has pressed charges against the two passengers and has permanently banned them from using the airline again.
Kronen said it is fairly unusual for an airline to call the police about drunk passengers.
“Quite a bit has to happen before the airlines contact us so there has apparently been unacceptable behaviour in this instance. There is limited space up there so such behaviour is unpleasant for other, law-abiding passengers,” he said.
The flight from Gdansk arrived at Bergen Airport at 10.46am.