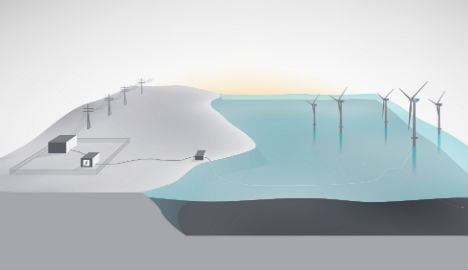 The battery storage facility will be the equivalent of two million iPhones. Image: Statoil
The system's one megawatt-hour Lithium battery capacity corresponds to that of “more than two million iPhones,” Statoil said in a statement, making it one of the world's most ambitious projects in the field.
The specialised website Recharge referred to the project as a “potentially game-changing battery storage system” in an industry where storage is a key issue.
Batteries are one of new frontiers in energy investment. Renewables producers can tap into stored energy to instantly meet peaks in demand or compensate for periods of low wind and poor sunshine.
Statoil's pilot project is due to be installed at the end of 2018 and hooked up to the world's first floating wind farm which is expected to begin producing electricity a year earlier, with five Hywind turbines placed 25 kilometres (15 miles) off the Scottish coast.
“Battery storage has the potential to mitigate intermittency (of wind energy) and optimise output,” Statoil said in a statement.
“This can improve efficiency and lower costs for offshore wind,” it added.
Dubbed Batwind, the battery system will be developed jointly with universities and Scottish suppliers, Statoil said.