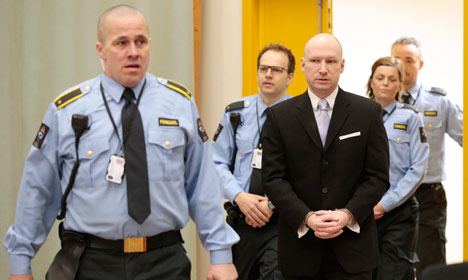 Friday was the final day of testimony in the terrorist's case against the state. Photo: Lise Åserud / NTB Scanpix
“The crimes my client was accused of are irrelevant,” Øystein Storrvik told the court on the fourth and final day of the 37-year-old's lawsuit against the Norwegian state.
“The person who is hated by everyone has only the law as his last chance to guarantee his fundamental rights,” he said, asking the court to look beyond the “popular perceptions” about Breivik.
Norway's most infamous inmate is serving a maximum 21-year sentence — which can be extended if he is still considered dangerous — for killing eight people in a bombing outside a government building in Oslo and then murdering another 69, mostly teenagers, in a rampage at a Labour Youth camp.
His shooting spree on the island of Utøya lasted over an hour, as he methodically stalked and killed up-and-coming leaders of Labour, Norway's dominant political party, which he blamed for the rise of  multiculturalism in the Nordic country.
He finished off many of his young victims, trapped on the small island with nowhere to flee but the surrounding waters, with a bullet to the head.
Since his arrest on the day of the attacks, he has been held apart from other prisoners and his contacts with the outside world, including visits and correspondence, have been strictly controlled.
Norway prides itself on a humane prison system aimed more at rehabilitation than punishment.
Stressing his client's almost five years in isolation, Storrvik accused the state of violating two clauses of the European Convention on Human Rights prohibiting “inhuman or degrading treatment or punishment” and guaranteeing respect for his “correspondence”.
At the Skien Prison where he is held, Breivik has three cells at his disposal — one for living, one for studying and one for physical exercise. He also has a TV with a DVD player, a games console, a computer without Internet access, and books and newspapers, according to authorities.
His complaints range from the trivial — cold coffee and microwaved frozen dinners, which he called “worse than waterboarding” — to hundreds of strip-searches and headaches which he claims are caused by his solitary confinement.
The state's lawyers have argued the isolation is necessary because Breivik is “extremely dangerous”, and claim his conditions fall “well within the limits of what is permitted” under the European convention.
All of the professionals — doctors, psychiatrists and prison staff — who have examined him in jail testified that they had observed no major change in his physical or mental state due to his prison conditions.
For security reasons, the four-day court proceedings were held in the gymnasium of the Skien Prison about 130 kilometres (80 miles) southwest of Oslo, where the killer is incarcerated.
The verdict is expected in about a month.