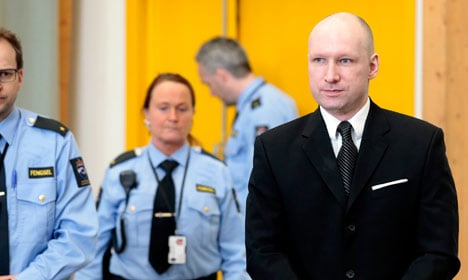 The trial will conclude on Friday. Photo: Lise Åserud / NTB scanpix
The rightwing extremist, who killed 77 people in a 2011 bombing and gun massacre, claims his almost five-year isolation constitutes “inhuman” treatment that violates his human rights.
The 37-year-old has complained of apathy, headaches, insomnia and concentration problems which have, he claims, prevented him from pursuing his political science studies since December.
“The reports [by nurses who see him regularly in prison,ed] have always shown that his emotional state [and] his interaction with the medical staff have been perfectly adequate,” Bjørn Draugedalen, the doctor of the Skien Prison in southern Norway where Breivik is incarcerated, told the court.
“He has had a good, calm and balanced attitude. His reasoning has been clear … He doesn't seem to be bothered that much,” Draugedalen said.
Breivik's lawyer, Oystein Storrvik, criticised the medical observations, noting that they were conducted behind a glass partition separating the killer from the medical staff.
Storrvik read extracts from a report written by Norway's pointman on human rights in November, which concluded that Breivik's prison regime “represents an elevated risk of inhumane treatment.”
Several of the recommended improvements have since been implemented.
On the stand Wednesday, Norway's most notorious inmate described his isolation as “torture” and “hell”.
As prison staff testified on Thursday about his mental health, he shook his head in disagreement several times.
Breivik is serving a maximum 21-year sentence — which can be extended if he is still considered dangerous — for killing eight people in a bombing outside a government building in Oslo and then murdering another 69, mostly teenagers, in a rampage at a Labour Youth camp.
His shooting spree on the island of Utøya lasted over an hour, as he methodically stalked and killed up-and-coming leaders of Labour, Norway's dominant political party, which he blamed for the rise of multiculturalism.
The doctor at the Ila prison outside Oslo where Breivik was held until September 2013, Bjarne Haukeland, also undermined the killer's arguments, saying he seemed to have resigned himself to his isolation.
“He is probably surprised that it has gone so well,” he said.
Before him, the head of the Ila prison, Knut Bjarkeid, and the psychiatrist tasked with monitoring Breivik in prison, Randi Rosenqvist, also testified that they had seen no indications that he was suffering from his isolation.
The final day of proceedings will be held on Friday.
For security reasons, the proceedings are being held in the prison gym.