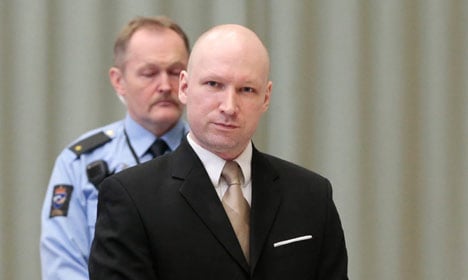 Out of respect for his victims, the terrorist's remarks will not be broadcast. Photo: Lise Åserud / NTB Scanpix
The mass murderer told the court that he would fight “to the death” for National Socialism, the political doctrine of the Nazi party, as he took the stand Wednesday in a lawsuit against the Norwegian state, confirming fears he would use the platform to grandstand his extremist views.
“I have fought for National Socialism for 25 years, and I will fight for it to the death,” he said.
The right-wing extremist had defiantly made a Nazi salute on the first day of proceedings on Tuesday but obeyed a judge's orders not to do so on Wednesday.
Norwegian authorities have refused to broadcast his testimony on television to try to prevent him sending coded messages to supporters and out of respect for survivors of his murderous spree in 2011 and the families of the victims.
Describing himself as a model prisoner, the 37-year-old charged that the state “has been trying to kill me for five years” by keeping him in isolation. He describes his conditions as “torture” while many would argue they are more than comfortable.
Breivik spent much of his testimony elaborating his extremist ideology, but he also complained of drinking cold coffee and eating frozen meals heated in a microwave — a fate “worse than waterboarding” — and said he was suffering from “headaches”, “apathy” and “insomnia”.
His lawyer has argued that isolation has caused Breivik “clear damage”, citing memory loss and an inability to focus on his political science studies.
Bullets to the head
Breivik is serving a maximum 21-year sentence — which can be extended if he is still considered dangerous — for killing eight people in a bomb attack outside a government building in Oslo on July 22, 2011, and then murdering another 69 people, most of them teenagers, in a rampage at a Labour Youth camp on the island of Utøya.
His shooting spree lasted an hour and 13 minutes, as he methodically stalked and killed many of the 600 up-and-coming leaders of Labour, Norway's dominant political party, which he blamed for the rise of multiculturalism. He finished off many of his victims with a bullet to the head.
He has accused the state of breaching two clauses of the European Convention on Human Rights, one which prohibits “inhuman or degrading treatment or punishment”, and one which guarantees the right of respect for “private and family life” and “correspondence”.
aking the stand for his first public statement since his sentencing in 2012, Breivik said he adhered to a “non-violent” version of National Socialism, a statement bound to provoke many in a country occupied by the Nazis during World War 2.
'Exemplary' prisoner
For security reasons, the case is being heard in the gymnasium of the Skien Prison in southern Norway where he is imprisoned.
On the stand,  Breivik made a series of demands to the court, indicating he wanted to be allowed to receive uncensored letters, see other prisoners and receive visits from at least five friends and supporters.
He also wants the right to publish books.
Breivik claimed to have been subjected to 885 strip-searches since his arrest almost five years ago.
“It's understandable when it's justified, for example when it involves people who have a violent past or something like that, but I have been conducting myself in exemplary fashion for five years,” Breivik said.
He called the searches “humiliating” and “senseless”.
He has access to three cells — one for living, one for studying and a third for physical exercise — as well as a television, a computer without Internet access, a games console, books and newspapers, and puzzles. He is able to prepare his own food and do his own laundry, according to state representatives.
But he said the conditions “were the most inhuman in the Western world”.
In one moment that provoked snickers, Breivik said his newfound fascination with a popular reality show was a sign of the damage inflicted by his conditions.
Some survivors were concerned by the attention given to Breivik's remarks.
“He shot me five times and killed my friends. The ridicule here on Twitter is perhaps drawing the focus away from what he actually did,” Utøya survivor Viljar Hanssen tweeted.
The only representative of the victims' families attending the proceedings, Freddy Lie, lamented the fact that Breivik had been given a platform for his views.
“I expected the judge to crack down on that because there were a lot of elements that had nothing to do with the case,” he told AFP.
He said he found it hard to listen to the “complaints” of the man who had killed his 16-year-old daughter Elisabeth on Utoya.
But “this is a state of law. Everyone has the right to be heard.”