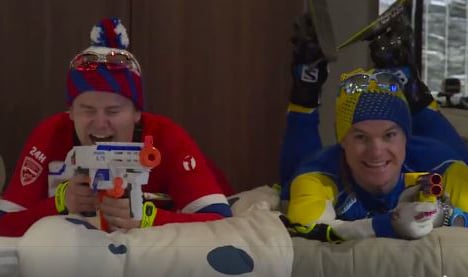 What happens when you dress two men in very tight colourful lycra that represents their national flags, get them to clip on cross-country skis and make them race around an Ikea store in the name of comedy?
The answer is a video that's scored more than 3.8 million hits since it was uploaded by Norwegian broadcaster NRK Sport last week.
Over the course of five minutes, the sporting rivals, wearing Swedish and Norwegian team strips, are pitted against each other to a screaming soundtrack that resembles something from a 1980s kids TV show. They jump in ball pools, struggle up stairs and shoot at champagne glasses before one of them emerges from the store victorious, carrying a makeshift backpack crafted out of an Ikea bag.

Judging by most of the comments on social media, viewers from both countries find the bizarre idea absolutely hilarious.
“The struggle between Sweden and Norway continues! We clearly see who's the elite!” one viewer, Åsa Marianne Björnberg, posted on Facebook.
Another commentator, Linus Holmqvist, said: “This may have been the best I have seen. Cheered on Sweden way too much!”
“Exciting and fun to watch,” wrote Melina Sarajlić Mujkanović in Norwegian, while Lisa Olsson suggested that the video (which actually includes very little dialogue) should be translated to appeal to an even bigger audience.
“Someone should make English subtitles for this and spread our Scandinavian awesomeness across the world!” she posted. A screengrab from the video.
The Local's editorial team remain slightly baffled by the stunt, so we asked Al Pitcher, one of Sweden's most popular English-language comedians, why he thought the Nordic audience had taken to the video, which is one of a series of sporting parodies recently released by NRK.
“I think the great recipe with this is that it's Norway versus Sweden, it's skiing, it's Ikea…it ticks a lot of boxes.”
He also suggested that some shoppers might identify with the general challenge of getting out of the flat pack furniture store alive.
“It actually sums up most of my feelings when I have to go to Ikea (…) the pressure and fears when I get inside that place. I love the way most of the staff and the shoppers just stare at them and don't get involved. I am sure they see weirder things each day.”
However the stand-up star, who hails from New Zealand, slightly dodged the question when asked whether the video was funny enough for him to share it with his own friends and family.
“The things that go viral are incredible – like cats getting scared of cucumbers. Anything can happen!” he laughed.
Meanwhile American improvized theatre actor Josh Lenn, who is based in Stockholm, said: “This video is loaded with cultural jokes that a foreigner would have trouble understanding and not even a Swede can fully comprehend”.
“What I find funny from a comedy stand point is the full out commitment by the skiers, and the contrast with the very low key reactions in the store. The best is the one woman pleasantly nodding after getting tagged with a dart.”
READ ALSO: 'I finally get why Swedes are obsessed with Nordic skiing'