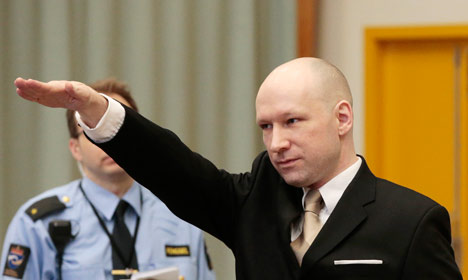 Domestic terrorist and convicted mass murderer Anders Breivik. Photo: Lise Åserud/NTB Scanpix
Despite the theatrical entrance, Breivik's lawyer Øystein Storrvik insisted the suit, which contends his prison isolation constitutes “inhuman” treatment, was necessary because his client would likely be spending the rest of his life behind bars.
“This case is about something much more than what many people think, just a lawsuit brought to allow Breivik back into the spotlight to explain himself,” Storrvik said.
“This case is simply about his detention conditions for the rest of his life,” he said in the makeshift courtroom set up in the gymnasium of the Skien prison where the killer is being held and where a climbing wall, two basketball hoops and exercise bars were visible.
See also: Most secure court in Norway history to host Breivik trial
Breivik is serving a maximum 21-year sentence for killing eight people in a bomb attack outside a government building in Oslo in July 2011, then murdering another 69 people, most of them teenagers, in a rampage at a Labour Youth camp on the island of Utøya.
His prison sentence can be extended if he is still considered a danger to society.
Sporting a shaved head and a dark suit with a white shirt, Breivik entered the courtroom, turned toward the media present and extended his right arm.
On several occasions during his 2012 trial, he made a variation of the Nazi salute by holding his closed right fist to his heart and then extending his arm.
“Incredibly provocative,” reacted Berit Reiss-Andersen, one of the lawyers for the victims' families in his 2012 trial, speaking on television channel TV2.
The Nazi salute appears to confirm the belief that he has radicalised in prison, having recently described himself as a “militant nationalist”.
In a letter to AFP dated October 27, 2014, he said he had pledged his “allegiance to national socialism”.
'Torture'
Breivik has in the past likened his prison conditions to “torture”.
Now, the 37-year-old is suing the state for breaching two clauses of the European Convention on Human Rights, one which prohibits “inhuman or degrading treatment or punishment”, and one which guarantees the right of respect for “private and family life” and “correspondence”.
In opening remarks, his lawyer stressed the frequent use of handcuffs and hundreds of strip-searches his client had been subjected to in the Ila prison near Oslo where he was held until September 2013. But his main complaint concerns his isolation.
Since his arrest on July 22, 2011, Breivik has been held apart from the rest of the prison population and his contacts with the outside world strictly controlled.
Prison officials censor his mail to prevent him from establishing an “extremist network”, according to authorities, and his rare visits are almost exclusively with professionals behind a glass partition.
See also: Breivik trying to establish terror network, state says
The only exception in five years was a five-minute meeting in 2013 with his mother during which they hugged, shortly before she died from cancer, Storrvik told the court.
Breivik is suffering “clear damage” from his isolation, according to Storrvik, who cited memory loss and an inability to focus on his studies.
'Extremely dangerous man'
“Put simply, Breivik is an extremely dangerous man,” countered Marius Emberland, the lawyer from office of the attorney general defending the state.
“It's unpleasant and it's supposed to be unpleasant to serve a long sentence,” he added, stressing however that the prison conditions were “well within the limits of what is permitted” under the European Convention on Human Rights.
Breivik followed the arguments closely, shaking his head several times to show his disagreement.
In prison he has access to three cells — one for living, one for studying and a third for physical exercise — as well as a television, a computer without Internet access and a game console. He is able to prepare his own food and do his own laundry.
The proceedings, which will last until Friday, are being held at the Skien Prison 130 kilometres (80 miles) southwest of Oslo.
They are being broadcast on Norwegian television, though Breivik's own testimony on Wednesday morning will not be aired out of respect for the victims.