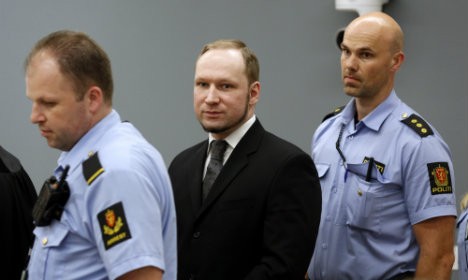 The right-wing extremist is serving 21 years for the murder of 77 people in a bombing and shooting assault in July 2011.

He accuses the Norwegian state of breaching two clauses of the European Convention on Human Rights, one which prohibits “inhuman or degrading treatment or punishment”, and one which guarantees the right to respect for “private and family life” and “correspondence”.

Since the killings, Breivik, 37, has been held apart from the rest of the prison population and his contacts with the outside world strictly controlled.

His mail is censored by prison officials to prevent him from establishing an “extremist network”, according to authorities, and his visits, which are rare, are almost exclusively with professionals behind a glass partition.

He has previously likened his prison conditions to “torture”.

The proceedings, which are likely to reopen painful wounds for victims' families, are due to open on Tuesday and run until Friday.

For security reasons, they will be held in the gymnasium of Skien prison, about 100 kilometres (60 miles) southwest of Oslo, where the killer is incarcerated.

Breivik's lawyer Oystein Storrvik told AFP his client was “very stressed due to his isolation”.

“One of his main things to do (in prison) was to study and he has stopped that now, and I feel that is a sign that isolation has been negative to his psychological health.”

The office of the attorney general, however, has insisted that Breivik's prison conditions are “well within the limits of what is permitted” under the Convention.

He has access to three cells — one for living, one for studying, and a third for physical exercise — as well as a television, a computer without Internet access and a game console. He is able to prepare his own food and do his own laundry.

“There are limits to his contacts with the outside world which are of course strict… but he is not totally excluded from all contact with other people,” the lawyer who will defend the state at trial, Marius Emberland, told AFP, citing Breivik's contact with penitentiary staff.

Breivik was in August 2012 handed a maximum 21-year sentence for killing eight people in a bomb attack outside a government building in Oslo and then murdering another 69 people, most of them teenagers, in a rampage at a Labour Youth camp on the island of Utoya.

Breivik's shooting spree lasted an hour and 13 minutes, as he methodically stalked and killed many of the 600 up-and-coming leaders of Labour, Norway's dominant political party, which he blamed for the rise of multiculturalism.

His sentence can be extended if he is still considered a danger to society.

In a letter sent to AFP in early 2014, he threatened to go on a hunger strike if his 12 demands were not met. One of them was to be given a Playstation 3 to replace the Playstation 2 put at his disposal.

This time his lawyer says Breivik intends to pursue his case through all available legal channels.

“If we have to, we will bring it… to the European Court of Human Rights,” Storrvik said.

Ahead of the hearing, both camps have received heavyweight backing.

But according to public broadcaster NRK, doctors who monitor Breivik in prison are expected to testify that he is not suffering from his conditions.

Almost five years after the tragedy, Norway is trying to forget the name of the man who scarred it so deeply.

Media outlets often refer to him simply as “the terrorist” or “the child killer”.

Breivik's own testimony in his lawsuit, due on Wednesday, will not be filmed out of respect for the families of the victims, and to prevent Breivik from sending any signals to supporters.