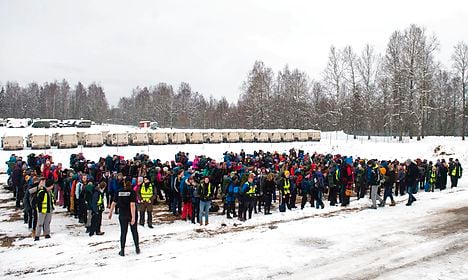 Norwegian teens take part in a roleplay as refugees during the event "Camp Refugee" by the organisation "Refugee Norway" at an old military camp in Trandum earlier this month. Photo: Fredrik Varfjell/
This is not a scene playing in the Balkans but in Norway, one of the richest countries in the world, where a group of teenagers are spending 24 hours on the road, living as refugees.
In a country where teens often walk around with luxury handbags and the latest iPhones, the aim is to raise awareness and give youngsters a bit of insight into the lives of millions of people much less privileged than themselves.
For many, the experience is part of their “civil confirmation” — a secular version of the Christian coming-of-age ceremony which is a rite of passage for 15-year-olds in northern Europe.
“I hate my life,” groans a young girl in the group, some of whom are still asleep on their feet.
The 'UN camp' where they thought they had found refuge for the night has just been 'attacked'.
In the darkness, with temperatures hovering around zero, they must press on, ignoring their hunger and diving into snowbanks to hide at the first glare of headlights.
Their journey began around 12 hours earlier at a decommissioned military camp near Oslo airport, just a stone's throw from a real detention centre for illegal aliens awaiting deportation.
'It's exhausting'
Their watches and cell phones confiscated, the teens have been grouped into 'families' of 20 who have had to flee unrest in a fictitious Sudan, crossing imaginary borders to reach Norway to seek asylum.
En route, they come up against the red-tape nightmare of a Kafkaesque and corrupt bureaucracy, the bullying of sinister border guards who bark orders at them in poor English, and walk miles on ever-hungry stomachs…
“Netflix in the bath,” fantasises one 'refugee' aloud. “Netflix AND a kebab in the bath,” says another. In a country where teens often walk around with luxury handbags and the latest iPhones, the aim of the game is to raise awareness and give youngsters a bit of insight into the lives of millions of people much less privileged than themselves. Photo: Fredrik Varfjell/AFP/Scanpix
For dinner that night, they had only a few rice balls. Most of them devoured their meal, though some were put off by label with an apparent expiry date of 1998.
“The power of a label,” sighs the 'head' of the 'UN camp', Jonas Statsengen, one of the adult volunteers running the session.
As the hours pass, the teens' good-natured laughter gradually fades and swearing takes over.
“Horribly tough,” says Ebbe Marienborg Schieldrop, a teenager playing the role of a father in his group.
“It's obviously much worse for real refugees, but the hunger, the fatigue, all of it… It's exhausting.”
'A little extra soul'
Although the role play was not created in response to the ongoing migration crisis which has engulfed Europe over the past year, the sudden proximity of the refugees' plight has given it particular resonance.
Since the concept was imported from Denmark in 2004, some 80,000 Norwegian youngsters have gone through the experience of living life as a refugee for a day.
“They leave with a little extra soul,” says Lasse Moen Sørensen, deputy head of Refugee Norway, a non profit organisation.
And while it only scratches the surface of a much harsher reality, it helps raise awareness of the refugees' plight.
“We're very lucky,” acknowledges one of the participants, Birgitte Solli, her eyelids heavy from exhaustion.
“This is learning by doing,” explains Kenneth Johansen, founder of Refugee Norway.
“If you read about refugees, you'll remember about 20 percent. And if you experience it, you'll remember 80 percent. You will learn it for the rest of your life,” he says.
Unforgettable experience
“If you see a news segment or read about it, you'll remember the feeling you had at Camp Refugee,” he says.
The experience ends with a review, with Johansen helping the youngsters put things into perspective, using hard-hitting videos to drive the point home.
“Never forget this night you spent outdoors, crossing borders with your backpacks and all the yelling. That's what 60 million real refugees are living through everyday,” Johansen tells the groggy teens.
“For you, it was a game. For them, it's hell on Earth everyday.”