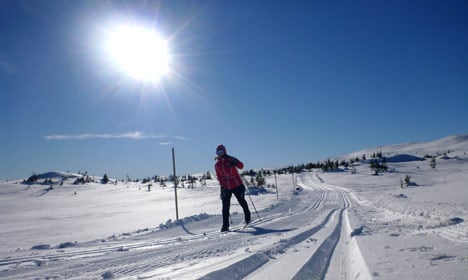 "Nobody in the world spends as much on sports equipment as the Norwegians." Photo: Erik Johansen / NTB scanpix
Billions of kroner are at stake if Norway’s winters become significantly warmer, a report entitled ‘Grå Vinter’ (Grey Winter) that was presented by the Norwegian Climate Foundation in Oslo on Wednesday warned.
The report warned that the traditional Norwegian winter may disappear completely or partially within the next few generations. A snow map projecting conditions through 2100 shows that low-lying and coastal parts of Norway, the most populated areas of the country, will already face significantly shorter snow seasons by mid-century.
In the year 2100, the norm can be that large swaths of the country have very little winter snow, if any at all. How quickly the changes occur and their severity depend on the levels of greenhouse gas emissions.
Fewer ski days
Dagrun Vikhamar-Schuler from the Norwegian Meteorological Institute said that there have always been variations to Norway’s winter weather but the trend shows that snow conditions are undergoing significant changes.
“The measurement station at Bjørnhol tin Nordmarka shows that snow and skiing conditions have changed quite clearly over the past 100 years. We have lost four ski days each decade since 1900. That means a total loss of about one and a half months,” she said.
The last 50 years of measurements at Bjørnholt also show fewer days with dry snow. For skiers, that means more days with wet snow conditions. The same trend is found in Sirdal in Rogaland, where measurements also show a significant increase in wet snow days over the past 50 years.
The reason for the wetter snow is that Norway’s annual mean temperature is on the rise.
One degree warmer
“The average annual temperature has risen by about 1 degree from 1900 to 2014. We have always had natural fluctuations, but now we also see clearly the effects of human-induced changes,” Vikhamar-Schuler said.
With winter and snow an integral part of the Norwegian national character, what snowless winters will do to hearts and souls is one thing. But economically, the snow loss will have serious consequences for industry and municipalities, said Hilde Charlotte Solheim, a former tourism director who wrote the report for the Norwegian Climate Foundation (Norsk Klimastiftelse).
“It’s impossible to set a value on a perfect winter day spent skiing but in the report, those who know the most about Norwegians’ relationship with snow and skiing pointed to the importance of snow for local communities. And there is a lot of talk about its formidable socioeconomic importance,” she said.
Two million skiers
“Nobody in the world spends as much on sports equipment as the Norwegians. Figures from the sports industry show that Norwegians spend four billion kroner on equipment for winter activities,” Solheim added.
She said that around two million Norwegians strap on their skis at least once a year. On winter’s best snow days more than 200,000 people can be found skiing in the fields around Oslo, which also makes an important contribution to public health.
She stressed that the national activities of ski association Norges Skiforbund and the Norwegian Trekking Association (DNT) provide clear economic boosts to local communities.
“The big World Cup events typically have a turnover of 15-20 million kroner per event. Each event krone in turn provides four kroner in additional business through the purchase of goods and services in the region,” the Grey Winter report said.