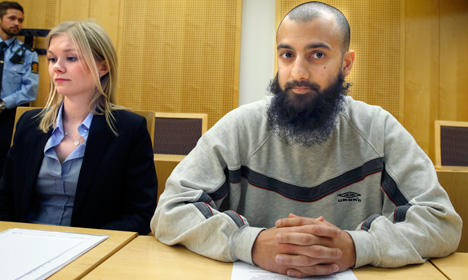 Ubaydullah Hussain and his lawyer, Hilde Wiig Nicolaysen. Photo: Terje Pedersen / NTB scanpix
The high-profile Islamist made a Oslo District Court appearance on Thursday, where his preventive custody was extended.
Hussain, 30, was arrested in December and charged with recruiting foreign fighters to the terror group Isis and several other offences, including threatening a witness.
His lawyer, Hilde Wiig Nicolaysen, said that he denies the charges against him.
“The way the indictment stands today, it is worded very generically and is not linked to specific people or actions. As of today, he actually knows very little about what PST alleges to have happened in this case,” she told broadcaster NRK.
The broadcaster reported on Thursday that Hussain has been linked to seven specific people that PST suspects have joined Isis as a direct result of his recruitment. The agency accuses Hussain of having deliberately targeted “vulnerable people” including drug addicts and criminals.
“We are working very hard on several parallel cases and we are of course very keen to investigate the recruitment. We want to hit the environment that recruits people to commit serious criminal offences,” Beate Gangås, the head of PST’s prosecutorial department, said.
Around 90 Norwegians have gone abroad to join up with Isis and PST believes that at the end of 2015 there were still roughly 40 Norwegian foreign fighters actively participating in hostilities in Syria and Iraq.