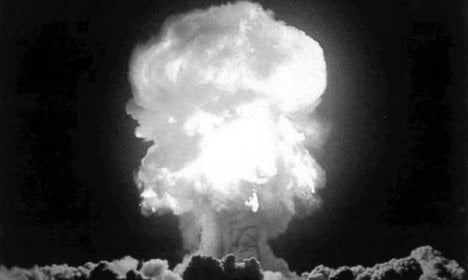 The prospect of a nuclear war in Europe is a terrifying one and one that a band of Norwegian men refused to allow. Photo: Thomas Williams/Flickr

On the first of September 1939 Nazi German boots crossed the border into the Second Polish Republic. Under the leadership of Adolf Hitler, the invasion set off World War 2, a conflict that lasted six horrific years  and claimed the lives of an estimated 50 to 85 million people, making it the deadliest conflict in human history.

History books and education systems across western Europe follow a familiar narrative of the war: the German domination of much of Europe by 1940 during the so-called ‘Blitzkrieg’ (Lightening War), the heroism of Allied pilots during the Battle of Britain in 1940, the assault on the eastern Soviet front by German forces in 1941 and the eventual invasion of mainland Europe by Allied forces on D-Day 1944 that became widely known as the beginning of the end for the Axis forces.

Yet many are most likely unaware of the efforts made by a small band of Norwegian men to prevent the best Nazi German scientists, including Nobel Prize winner Werner Heisenberg, from obtaining the precious deuterium oxide – heavy water – essential for the creation of a nuclear weapon.

It is these heroic efforts made by these men who made up the Norwegian Independent Company 1 (Kompani Linge) that led American author Neal Bascomb into the far reaches of the Norwegian wilderness to tell their gripping story in his new book 'The Winter Fortress'.

The book tells a thrilling historical tale of espionage, sabotage, heroism and spies on skis. Most importantly it describes with outstanding detail the unrelenting efforts by a ragtag group of Norwegians to prevent Nazi scientists from obtaining heavy water from the only place in the world at that time to mass produce the substance, the Vemork plant in Nazi-occupied Norway.

The Vemork plant is located close to the small town of Rjukan, in the remote region of Tinn. The plant’s original purpose was to produce fertiliser, but it became apparent to scientists that one of the by-products of the process was the highly valuable deuterium oxide, or heavy water. By December 1934 the Vemork plant began to mass produce the essential ingredient required in creating the most lethal bomb known to mankind. The Vemork plant in Norway would be one of the most significant locations in the world during WW2. Photo: Grob/Wikicommons

Bascomb meticulously narrates how – with the assistance and training of the British Special Operations Executive (SOE) – fishermen, students, policemen, factory workers, and men simply looking for a place in the world came together and managed to become a deadly fighting force that pulled off what SOE historian Michael Foot called the most successful act of sabotage in all of World War Two. It was an act that contributed immensely to Nazi Germany's failure to develop and weaponize nuclear fission, a prospect that sends shudders down the spines of a contemporary audience.

During the research, Bascomb went to extraordinary lengths to grasp the hardships these brave Norwegians went through to secure the safety of not only Europe but the wider world.

“I spent a couple of weeks in Rjukan, retracing the steps of the saboteurs, living in the old cabins buried in the snow, firing same weapons they used at the time. My little commando course in Norway. Can't say I'm much of a cross country skier, but I gained an appreciation for the conditions they faced in wintertime,” Bascomb said.

This experience in the Norwegian wilderness, facing firsthand the tremendous obstacles scaled by these men, helped Bascomb realise this was not just a story of high octane action, it was also a story of how the individuals making the ultimate sacrifice managed to form a unified group in the face of overwhelming odds.

“This is really a tale about how a ragtag group of soldiers survive together in the wild for months at a time. How do they maintain their cohesion and morale?” Bascomb said.

Some of the brave men in the Kompani Linge. Photo: Nils/WikiCommons

This is not the first time the story of the Norwegian heavy water sabotage has been told, but with 'The Winter Fortress', Bascomb explores figures within the story that previous works have overlooked. One such individual was the Norwegian scientist, intelligence officer and military organiser Dr. Leif Tronstad.

Bascomb highlights Tronstad’s hugely influential role within the operation to bring down Vemork. One of the key masterminds behind the entire operation, Bascomb’s access to unseen documents gives a rich and detailed account of how Tronstad's efforts changed the course of history.

“From start to finish he (Tronstad) was one of the mastermind of the operation, and his story is one of the most dramatic ones in the whole of history. It's astonishing he has been given such a short shrift,” Bascomb said.

As many regular Netflix users may have noted, the fascinating story of the Norwegian heavy water sabotage has gained a growing interest with national broadcaster NRK's mini-series The Heavy Water War (Kampen om tungtvannet) now airing on the streaming service. Nearly 1.3 million people saw the opening episode on NRK, a record audience for a drama series in Norway.

The Norwegian WW2 heroism is bound to find an even wider audience in the near future. Bascomb's Winter Fortress will be released in May of this year, and has already grabbed the attention of Paramount Pictures, which option the film rights to the story with Michael Bay, the director of Pearl Harbor and the Transformers franchise, reportedly attached to the project.

HISTORY
What unites and divides the Nordic countries?
Url copied to clipboard!